Back-to-back trips = no blogging for a couple weeks. I’m not one of those travelers that’s motivated enough to lug around a laptop, much less add one more item to the list of things TSA can harass me about. I’m already getting crazy with secret 4-5 oz bottles of*gasp* liquid! On February 26 I caught an early morning flight to DC to join other staff and volunteers of the TS Alliance for training and meetings with representatives and senators. Little did I know that of the four flights I would have over the next couple weeks, this would by far be the best one. It was almost empty and everyone could have their own row. I was traveling with Wendi, and she’s one of those social types that actually engage total strangers in conversation (I’m trying, okay!?). We began talking to a guy that, quite by fluke of another medical issue, had discovered that both his daughters had a health issue related to a faulty gene as well. Theirs is quite different though. I can’t remember what it was called, but basically they are lacking the ability to create an enzyme that creates a protective coating of organs such as the lungs and liver. So although they don’t have any current health issues, the basic drinking and smoking that other people may partake in casually, is a whole different ball game for them. They are at a very high risk for cancer because of this. They are young now, but that’s a lot of pressure as they get older. Those teen and college years are going to be awfully stressful for those parents…

We arrived at the Melrose Hotel with plenty of time to spare before training, so we went strolling through Georgetown and stopped for lunch, where I categorically deny having any wine. We also happened by DC Cupcakes of reality show fame. Cute cupcakes, but honestly, I think they were from the day before. Apparently the sisters on the show (which I really don’t watch) only come in when they are filming. Oh, the lies of reality television. We all received matching shirts to wear on the Hill which is great for visibility, but bad for the amount of time I spent obsessing over what to wear before I left. I suffered a closet induced mental breakdown for nothing, but whatever. My Jackie O. dress is still a bit tight where my body mistakenly thinks there is still a baby inside. My ribs would have hurt by the end of the day anyway. We rose early to get through security and where I met my favorite government employee of all time. As we prepared to pass through security at the entrance of Cannon, there was a hysterical number of abandoned coffee cups just inside the door on a ledge. Had I had the time, I would have taken a picture. A female security guard walked over, took one look, and it was, “Oh Hell NO! This isn’t a trashcan! Tell those people outside to use the one out there!” Then she stormed off yelling, “This is bullshit!” I should apply for that job because I used to do that when I worked at Barnes & Noble and Starbucks, and I always got in trouble…

We Georgia volunteers managed to meet with the offices of all the representatives but three, Paul Broun and David Scott, as we never got a response to our requests from either office, and Sanford Bishop, who responded, but had no staff available to meet with us. The morning started off great as our very first meeting was in the office of  supporter Rep. John Lewis who promised

continued support. We had other positive meetings, but this was the only straight up yes on the spot. Of course, given that we were there just before the sequester, these meetings were a little different from what they would usually be. What we should have been doing was asking for them to sign the FY2014 Dear Colleague letter to support tuberous sclerosis research. Problem is, as you probably know, Congress never got around to dealing with 2013. So we were trying to get that through, and let them know that eventually there will be a letter for 2014. You see, the House wrote a bill that funded the Tuberous Sclerosis Complex Research Program last summer, but things came to a stop at the Senate and here we are still awaiting a budget for a year that will probably be over before anything gets done. So thanks to the sequester that went down a couple days later ,there are more cuts…to everything. I could rant here about how this kind of performance in the private sector would lead to mass firing, but other people are far better at discussing politics. 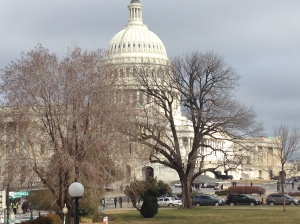 That evening the Alliance held the Volunteer Awards dinner, my final evening of being introduced to people and pretending not to know who a lot of them were already, as if I haven’t spent the last several months since Connor’s diagnosis stalking everyone online to see how others were faring with TSC. “Oh, hello, nice to meet you!” (In my head: So you’re the mom of so and so, who’s 10 years old, loves soccer, and went as a zombie for Halloween).

Dinner was steak, potatoes and asparagus. Why am I telling you this? It’s significant and will affect the next several days of my life.

Then there were drinks in the lobby, and a trip to a bar across the street.

It was a fun evening, but given the nature of the trip I didn’t get too crazy with the drinks. That turned out to be stupid. I might as well have danced on tables for all the good it did me because when I woke up the next morning, I was NOT well. Wendi had an early morning flight, and should be very grateful of it. I spent about an hour or so being “not well”. And then a miraculous recovery! That’s how I roll. I’m never sick for long. So I spent the next few hours before my flight checking out the monuments. 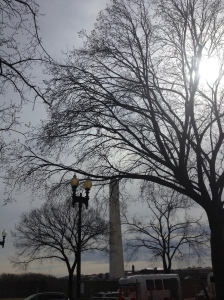 I found myself feeling particularly tired after a couple hours, which I chalked up to the fact that I hadn’t gotten much sleep the last couple nights, so I headed to the airport early. This turned out to be the only reason I got home that day. I arrived at Reagan to learn that my flight was cancelled and I could either go standby for the next two (full) flights home, or I could take the shuttle to Baltimore and fly from there. Two other early arrivers were in the same boat. I’m quite grateful to one of them, who is a weekly business traveler and had beat me by only a few minutes. Despite the clear skies and the fact that they had another (full) flight departing 45 minutes after ours, AirTran tried to tell him it was weather related. He called BS on that one, and they finally admitted the plane had mechanical issues. So at least for my irritation I got a free shuttle ride and plane ticket (which will probably be so blacked out I can’t use it). While I appreciate the free ticket as compensation given that I still ended up on a flight that departed roughly the same time, I DO  NOT care for them lying. I don’t care if it’s typical of the industry…it’s crap. I also do not care for the fact that I had booked a 2:00 flight, and two weeks earlier I received an e-mail that my flight was cancelled and I was now on the 4:00. I accepted that change–it was fine. But now this, too. And he said, well we sent you an e-mail today. I said, “Yes, you did send me an e-mail today, and it contained my itinerary exactly as it still was. The reference to the cancellation, I thought, was reference to the 2:00.” And I’m not crazy because the business traveler got the same e-mail and didn’t understand the flight was cancelled either. His colleagues that hadn’t arrived yet would later receive e-mails that they could not fly out until the next morning.

At any rate, they paid for a shuttle in which we had to bully the driver into actually taking us. And then when he finally left, he turned around to go back and get someone else despite our protests that we would barely make it as it was. Nonetheless, we did make it. And I thought I was dying the whole way.

Turns out, I wasn’t better after all. But I can’t even claim nausea. It was soooooo much worse. More of a “stomach full of acid eating away at my insides” kind of thing. The TSA lines were thankfully short, just the perfect length in fact, for me to redress, run for the bathroom and retch loudly enough to horrify the entire row of stalls.

Oh my God, it’s Cambodia again. The only time I had ever thrown up on a plane before. Oh please, not again. I can still hear that mean French lady snapping, “Close ze bag! Eet smells!” I rode the wave of post-puke feeling better-ness into feeling hopeful all was well. Until I got on the plane and was seated next to two girls  with attitudes that had seemingly never flown before. I mean, I don’t care if you’ve never flown, but I care that you can’t comprehend that the flight attendant has told you three times to shut off your devices and that you refuse to put your purse under the seat because the floor is dirty. I know an omen when I see one. I was so miserable between the bathroom and my seat, that I actually started to cry. The flight attendant was really sweet and gave me a hug. But then I was terrified of letter her know I was sick because she’d think I’d contaminated her, even though I was certain it was food related. Yeah, the ride home in Chris’s car wasn’t much better. But at least he brought plastic bags.

In defense of the hotel, I have to say I don’t know of anyone else getting sick. I thought the hotel was otherwise fantastic.

I feel bad if I picked this up elsewhere and I’m blaming them, but timing wise, I just don’t know where else it happened. And they were a little lax with the food I thought, as far as taking a long time to bring things out and letting stuff get cold…so that’s my guess anyway. I would have the pleasure of battling my body all the way to Boston, where I had to fly two days after I returned. But that’s for another entry if you made it this far…if the mention of vomit hasn’t scared you away. Don’t worry. That’s as detailed as it’s getting.

3 thoughts on “And then I told Barack, “Look! This is how we’re gonna do this! End of story!””