Connor’s first year was such slow development that I still can’t wrap my head around the last few months. I mean I vividly remember obsessing over him just lifting his head. It took forever. He sat somewhat independently around my birthday in October of 2012, and I thought here we go! But it was months before he could sustain it comfortably on his own. We put our old house on the market at the beginning of June this year. I vividly remember that his crib was still in the raised position as there was no worry that he would fall out. He could sit well, but couldn’t get into sitting on his own. It all started when he finally chose to roll from back to front. He went the other way on time, but refused to CHOOSE tummy time, leaving himself immobile. Since June 1, he

mastered pulling up to sit

become mobile through rolling and scooting

added consonants to his babbling

has shown recognition of more words

has become very (too) opinionated

and initiated his first game of peekaboo

His physical therapist almost cried when she saw him cruise. She had been away for a couple weeks as her granddaughter was having cancer surgery at CHOP for ganglioneuroblastoma. Ain’t life grand for our kids. Don’t worry. I’m aborting my angry Where’s God diatribe. (Side note: She said CHOP is the best for this surgery and they went in thinking they would be able to get 50%. They think they got over 90%!)

He shows definite favorites in books — his two favorites are Click Clack Moo and Hand Hand Fingers Thumb. If I start reading from them, he comes crawling over. The other day I asked him if he wanted to read Click Clack Moo and he crawled out of the family room into the playroom to it and looked up at me expectantly (after a brief scrunched face short cry because we startled him with our enthusiasm).

I’ve given up trying to get the detailed results about his MRI from Boston. We got the standard report of no growth, but we were supposed to finally get details on number of tubers and locations so we can target potential deficits etc. But as no one ever gets back to me when I leave messages regarding that particular report, I guess we have to wait until we go for our next TSC study visit in February or March when we will schedule a visit at the clinic. Not very happy about that.

Connor still refuses to feed himself, and when we give him finger foods, he just destroys them. We’ve tried cracker type food items, but he crushes them, so his physical therapist suggested beef jerky. It’s easy for him to hold and he might like the taste. And wouldn’t you know, he sucked on that Slim Jim a couple times and bit it into pieces. He only swallowed one piece, and that was by accident, but still progress. Slim. Jims. If you had told me I would be feeding my toddler Slim Jims…

He also still won’t get off the bottle, which we think is another one of his stubborn things, kind of like refusing to roll over. His speech therapist has been pushing a straw with a squeeze bottle, since sippy cups get swatted across the room. He actually let me put the straw in his mouth without fighting me yesterday for the first time. Maybe we’ll get rid of these bottles some day after all.

I learned a valuable parenting lesson last week when we went to the North Georgia mountains with my parents. While we have had to deal with crazy TSC stuff, as far as the normal baby health issues are concerned, Connor has never really had any issues. He’s barely even had a cold. Well, last weekend we had a major bout of constipation. I never understood what the big deal was. They go eventually right? Give them some prune juice or whatever. My bad. Sorry about the flippant attitude. Almost two days of fussing and irritability. He went an entire day with no food or drink whatsoever. It wasn’t until the next morning when he willingly took his meds that I had the brilliant idea to give him milk, water and juice with the oral syringe. My mom shook her head at one point and said, “When people ask what we did this weekend I can tell them we waited for Connor to poop.” And so I deemed the weekend PoopWatch 2013. I’ll spare you further details, and only say that a couple days later I was looking for a cork. 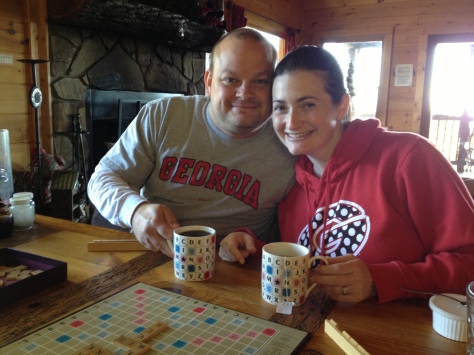 Toys are for chumps. 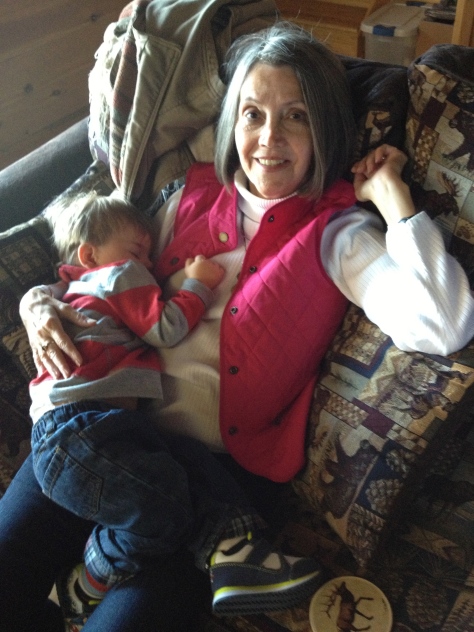 Let me out! I promise not to try and make a break for the woods again!

Our trip to the pumpkin patch a couple weeks ago: 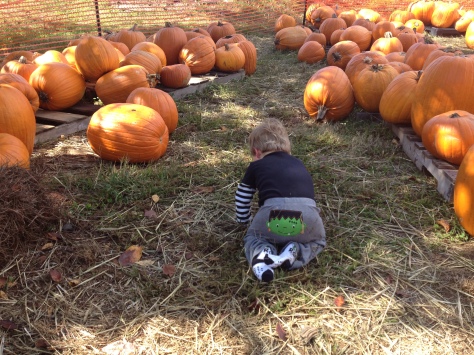 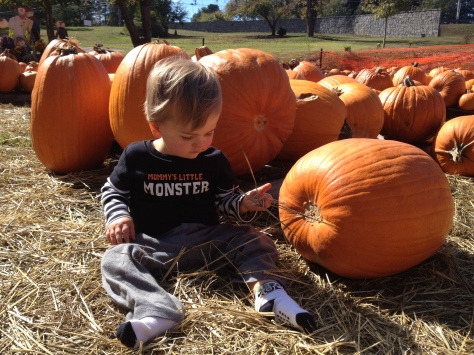 Please click on the Top Mommy Blogs icon to the right so I can move back up in the rankings!