Too bad. I’m gonna write about it anyway. I’m terribly jealous of it, you see. What I wouldn’t give  for this kind of exposure for TSC. But what it has done for the ALS Association is amazing. From July 29 to August 21, the ALS Association  received $41.8 million in donations, compared to just $2.1 million during the same time period last year.

Despite how horrific the disease is and the incredible success of the ice bucket challenge, the amount of criticism is incredible.

1. It’s a waste of water (everyone who said this better be taking three-minute showers).

3. People aren’t including the link or contact info to donate, or any factual information about ALS (ideally, yes people should make it as easy as possible to donate. If you haven’t done it yet, please include the link to ALSA.org)

4. Participants just want attention. JUST DONATE AND SHUT UP ABOUT IT.

Yep, number four is the one I want to address. Wouldn’t that be wonderful? Wouldn’t it be delightful if people just woke up and said, hey, I think I’ll donate to charity today! Yes, of course that does happen sometimes, but the reality is that it often takes a big disaster, media coverage, huge event, celebrity endorsement, or a diagnosis of a friend or family member.

Some people think the ice bucket challenge is nothing but people wanting attention when they should just quietly donate and say nothing. I might have made that cynical statement myself a few years ago. But I know something now that I didn’t know back then. It is extraordinarily difficult to get people to donate to your cause when you don’t have the NFL wearing your awareness color for a month or celebrities talking you up on late night television. And I think a lot of people criticizing it have no idea what it is like to try and draw attention to a charity that is helping your child, spouse, family or friend.

Those of us dealing with lesser known disorders are begging for support on social media. And if some “annoying trend” of dumping ice water on your head is what does it, so be it. We don’t have time to worry about whether our campaign is “like totally annoying” or “trendy” or “stupid.” What we know is that someone we love is hurting and we want relief for them. As I stated on Facebook (and was met with WAY too much enthusiasm by my friends for seeing me covered in crap) I would roll around in horse poop if it would bring in the donations. Just imagine what the critics would say about that. And then I would show those critics a video of Connor seizing or a picture of his two seizure-related black eyes.

If a silly gimmick brings in the money, so be it. I’d rather people donate because of a fun challenge than because they have received the heart-breaking news that they or a loved one have received a terrible diagnosis.

The first TSC walk we participated in was a couple months after Connor was born. He had just gotten out of NICU. We raised six times the goal. In the two years since, we have only raised about a third of that amount each year. I don’t say that to be critical. If you have ever donated at any point, I am extremely grateful and don’t consider anyone obligated. But I share this to make the point that it takes something big to get the donations. Connor’s new diagnosis was the big event that triggered such generosity in 2012. But now it’s just a normal, run-of the mill, annual activity of mine to raise money for the walk that no longer garners the same degree of attention. Who knows; maybe I really will have to roll around on a stable floor to get the attention I got the first year. That’s just how it goes when fundraising for charity. I mean, why do charities do walks, 5ks, banquets, or sell products? Why don’t people just donate! Because we’re human. We like t-shirts, food and Girl Scout cookies. And now — dumping ice water on our heads.

Why does something bad have to happen to inspire people? Is it such a terrible thing that people are donating because of something light-hearted and fun?

And to my friends that were challenged and opted to do it on behalf of the TS Alliance, I thank you from the bottom of my heart. 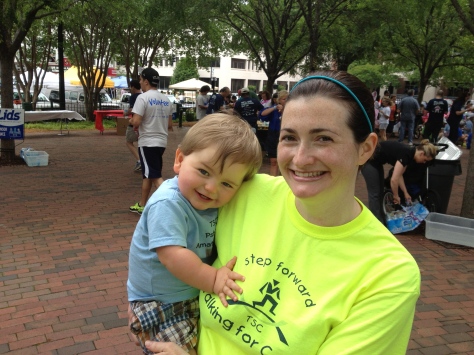 2 thoughts on “Another blogger talking about the #IceBucketChallenge! *groan heard worldwide”

Error: Twitter did not respond. Please wait a few minutes and refresh this page.