Last night Connor cruised the furniture for the first time! He took three side steps to move down the couch, and a little later, got up and did five in a row. I’m itching for him to walk! My back needs it for one. All his doctors concur that he’s right around the 27-pound mark, but apparently they all buy same defective brand of scale because I can tell you he weighs 80. There will be so many more places that we can go to fill our days. I mean, we have fun at the zoo and Tanglewood Farms, but it’s a bit of a work out. A few more months and I’ll be much more excited to receive invites to bouncy house parties because I won’t find myself facedown suffocating in the corner of a castle, being trampled by toddlers. We’ll probably go broke from me buying season passes to everything in a 50-mile radius.

Last week, Chris had to go to NYC for the day for a business meeting. He happened to stumble upon the taping of the Today Show — the last hour with Kathie and Hoda. They pre-tape Friday’s show on Thursday, and that is the episode you can see him wandering around the back, texting me to ask if he’s on TV and poking his head in to see what’s going on. It’s pretty funny. Here are some stills (yellow tie and briefcase strap criss-crossed): 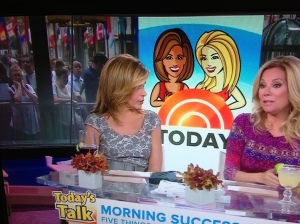 We had a busy weekend. Saturday, Chris and I made the day trip to Birmingham for the TS Alliance regional conference. I took this picture at the Alabama welcome center because it gave me the warm fuzzies.

We got to hear about the latest in clinical studies, surgical techniques and dealing with schools and IEPs — having been on the other side of IEPs as a regular ed teacher, I dread the possibility Connor could need an IEP. Let’s say I’m just a little jaded in that area, having seen first hand what happens when the law requires schools to provide a “free and appropriate education” but doesn’t provide funding or support. Fingers crossed he won’t, but we have to be prepared for the possibilities. The reality is he will most likely start school with one, given his delays. It’s unlikely by pre-k that I won’t feel he needs one, but I can still hope that won’t always be the case. Only time will tell.

My parents got to spend the whole day with Connor from waking up until almost bed time. Everyone survived so I’m booking a trip to the Caribbean.

On Sunday, we met up with the Cruz’s and the Weathersby’s for Boo at the Zoo. We had two pirates, a monkey and a cow. The cow was SUPPOSED to be Cookie Monster, but the manufacturer and I have a serious difference of opinion on what constitutes a 2T. We had to make a last minute dash to Target on the way for a new costume, where we very nearly added a third pirate to our crew. 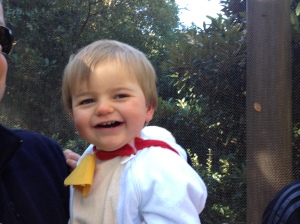 I wasn’t really sure how the zoo would go with Connor, being that he doesn’t walk yet, and while he loves animals, I wasn’t confident that the distance between him and the zoo animals would intrigue him. For the most part I was right. But the one place I thought he’d be least interested was one of the best. He loved the aviary because every few minutes the birds would all swoop the enclosure together, which he found hilarious as they whirred past his head. He perked up again at the petting zoo, but getting him to look off into the distance to spot the gorillas and giraffes just wasn’t happening. 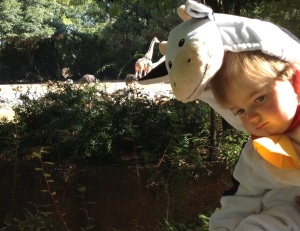 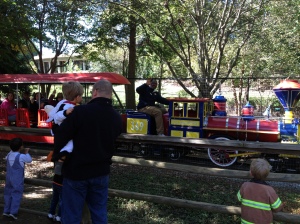 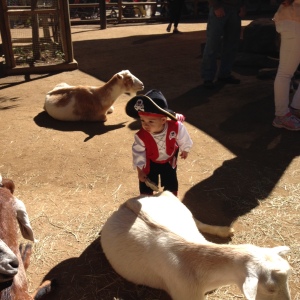 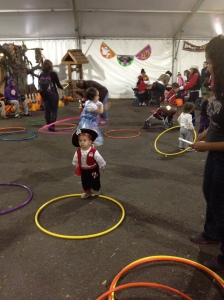 This is what happens when you want a picture of all four boys together:

Afterward we picked up food and went back to eat at the Cruz’s where Connor continued his doggy guilt trip on us by expressing his extreme delight over their dog Bacchus. And it was super adorable when David, who is one day older and fully mobile, got down on his knees to crawl along with Connor.

I am extending the deadline to enter the giveaway for the four FREE online speech therapy sessions. Enter here. There is no obligation beyond the four free sessions.