I haven’t blogged much over the last year, except to rage over my pet political issue, so imagine my surprise when I was invited to the Novartis Blogging Summit for TSC.

*Insert legal disclaimer here–While I was not paid for my time at the summit, my travel, hotel and food expenses were paid by Novartis.* They also gave me a box of kittens. No. I’m kidding. Only one lousy kitten.

Four other moms to kids with TSC were also there.

Tina of Captain Jacktastic, who I initially met around the time I started this blog through WordPress and later Facebook.

Heather who has written several pieces for Huffington Post, and I met for the first time last year in DC during the TS Alliance’s March on the Hill to continue funding for the Tuberous Sclerosis Complex Research Project.

Laurisa of Land of La, who was one of my early stalking victims when I was finally able to do TSC research for more than two minutes at a time without “breathing” into a paper bag.

And Stephanie of Lanier Landing, who was the only one I had really never had any social media contact with, but I had stumbled across her blog when seeking other TSC kids in Epidiolex trials. At the time, her son was the only one I knew of.

The day I left, Connor seemed to have a bit of cold and Chris thought he was coming down with it as well. This is called foreshadowing — but I’ll get into that later.

I was picked up at the Newark airport by a man holding a sign with my name. I am accustomed to such a lifestyle as I force my husband to stand in the driveway most days and greet me in this manner when I come home. It turned out Laurisa had shared my turbulent flight that wasn’t quite in a “luggage bins popping open” category, but definitely required gripping of the arm rests and the parents in front of me to intervene with their 10-year-old who was launching a panic. The driver whisked us to the Short Hills, New Jersey Hilton where I luxuriated briefly in the softest king bed ever then headed down to the hotel bar to meet the other ladies.

We had dinner with several Novartis employees and shared our stories so they could have insight on what it’s like to live day-to-day with TSC. For those that don’t know, Novartis produces Afinitor, a medication that can shrink certain types of tumors that occur in TSC. Connor, fortunately, does not have a need for this medication at this time, but it would be a likely course of treatment should he ever develop a SEGA in the brain or large AMLs in the kidneys.

It’s weird to sit and talk about your kid and TSC without having to give a bunch of background information, explaining what certain acronyms mean or why a particular medication might be preferable to another. They already know and they’ve already been there.

When dinner wrapped up at 8, we caught the train into NYC to meet another TSC mom who lives in the city.

Correction, four of us went. Tina’s no fool. She wasn’t about to let a king bed, personal hotel room and a long, luxurious shower without the door cracked listening for shenanigans pass her by.

We met fellow TSC mommy Naomi at Haymaker Bar, a few blocks from Grand Central Terminal, ordered drinks and appetizers and talked about some more acronyms that needed no defining.

Heather revealed that Times Square was on her bucket list and since I was pretty much intent on spending every minute I could squeeze out of this 24-hour trip in NYC, I was fully supportive of her checking that item off. We trekked through the tourist mecca, which was hopping on this Friday night. As we passed by the Disney store, we were drawn inside by the sheer number of people inside at midnight. Apparently a large number of tourists venture all the way to New York and decide, as one day rolls into the next, that they simply MUST HAVE AN ELSA DOLL RIGHT NOW. It was amazing. And a little sad. But mostly amazing. 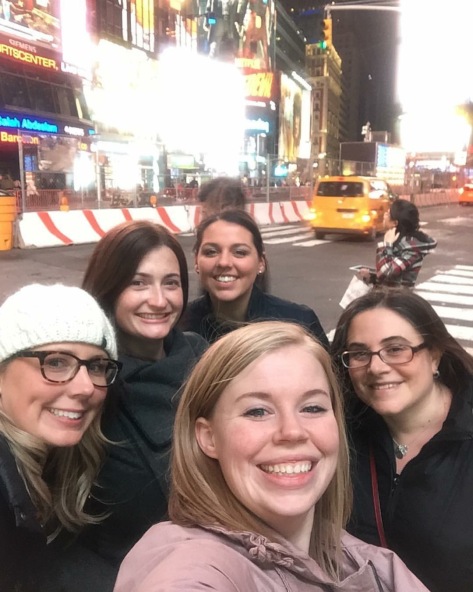 We caught the train back to Short Hills where we bonded further as we almost spent the night in the station. The hotel didn’t offer much hope of a taxi and their shuttle service had stopped. Our first Uber driver was too stupid to find the train station. No we are not shopping at Trader Joe’s at 2 am. The second one found us, but appeared to have only been a licensed driver for a day or two. At any rate, we made it back to the hotel where it took me another hour to fall asleep, still high off neon and LED lighting (did you know that the Times Square district is the only district with a requirement for businesses to have illuminated signs and that there is a minimum, rather than maximum, lighting requirement)?

The next day was filled with discussions of TSC, diagnoses and, most importantly, what kind of resources would we have liked to have had when we received the diagnosis. We spoke of the fear of what was out there on the Internet and at least one person had been told to stick to TSAlliance.org and not to Google. Period. Novartis unveiled some new informational pamphlets for our feedback and said they are revamping their informational site.

There were some other resources they want to be sure the TSC community is aware of.

I was not required to share these resources or blog about the summit in order to attend, but I wanted to make sure people know about these resources as for many of us, the use of Afinitor (Everolimus) could very well be on the table one day, if it isn’t already.

I’m sad to say that I had to leave just before we wrapped up to catch my flight so I didn’t get to spend more time with my mommies, but perhaps my suggestion, as I exited, to do this again in Vegas will be heeded by Novartis 😉

And so I headed home where I would soon learn that the cold was not a cold…but more about that in my next post. A full update on Connor to come and the reasons why I’ve dropped off the mommy blogging planet.