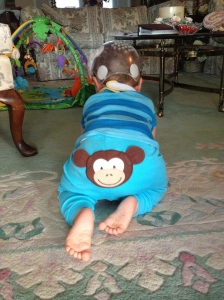 Connor had a good report from the physical therapist today. She was excited to hear he is pivoting in the sitting position, and he was also much more cooperative in making transitions. We’re at a point where he can maintain a crawling position, rock back and forth in it, and reach out for objects, but he needs assistance getting into it. He’s getting better at sitting back down on his own. He can also maintain a standing position, but needs assistance transitioning into that position as well.

Working on his physical therapy just got a whole lot more aggravating since we put the house on the market this weekend. Decluttering the house meant moving all his PT equipment into the garage. Making myself do PT with him is already hard enough–not because I don’t love spending time with him–but because therapy isn’t exactly what you envision doing with your child when you decide to have one. Going to get something from the garage really shouldn’t be that big of a deal, but that’s me. Not to mention, my attention span has become so awful that a million things distract me on the way and I forget what I wanted.

I spent a good portion of today cleaning scuffs off walls and doors and trying to turn the shower floor back to a non-vomit inducing color. Plan of attack for the shower: Chris laid a coat of Comet with bleach on it at 6 a.m.  and every so often I run some water and re-cover the surface. Twelve hours of this should do the trick, right? This is pretty much the last resort.

A couple did a drive-by on the house and I got down on all fours ninja-style to watch them watch the house. My life is pretty exciting.

Yesterday we got so carried away working on the house, that changing Connor’s diaper slipped our mind for an extended period of time. It wasn’t until he was bouncing in his jumperoo, and the downward motion would cause a cascade of urine to gush out onto the floor from his drenched diaper. I’ve always been grateful that the state of his diaper has never been a source for fussing, but I’m realizing that with my easily side-tracked state of mind, it would actually be beneficial if he’d give me the heads up once in a while. Yes, I really just blamed my baby for over-wetting his diaper.

I’m very rarely seeing any seizures with eye movement, but we’re seeing 1-2 a day in which he slumps down, turns his head to side, puckers out his lips and stares. They last 10-20 seconds, and he snaps right out of it.

Fingers crossed we start getting people looking at the house soon. I really hate making the bed for nothing…

Since I didn’t post much during May due to hosting so many guest bloggers, here are some highlights from the past month:

We went to Florida to visit Chris’s parents. 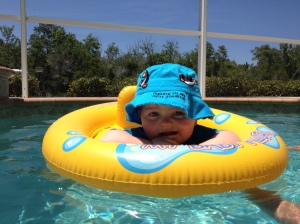 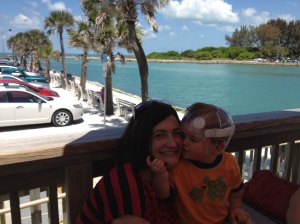 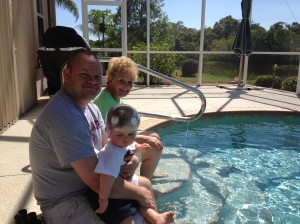 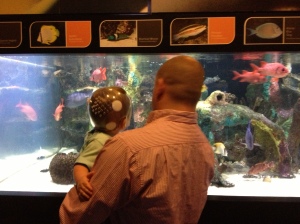 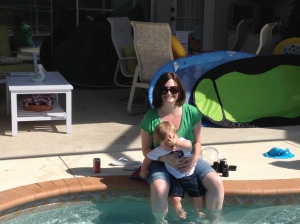 Connor went on the swings for the first time. The swing was hot so I finally got to prove to Chris that it IS good to keep “crap” in the trunk. 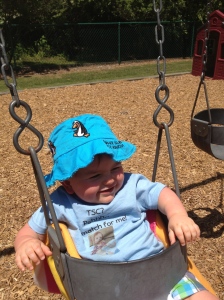 Connor rode up in the cart for the first time. 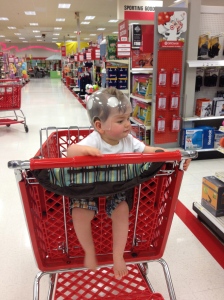 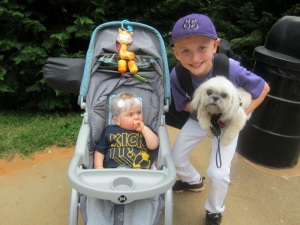 We had coffee and watched trains with my parents in downtown Norcross. 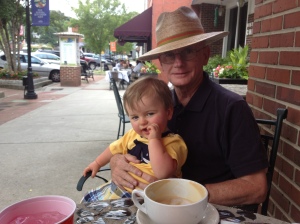 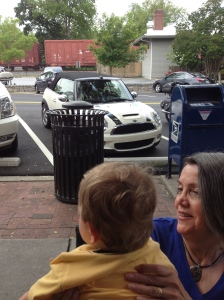 Seriously, it’s making me sad that nobody is entering my giveaway. You don’t want to make me sad, do you?