Connor had a 48-hour VEEG a few weeks ago. It was awesome. Instead of waiting weeks and weeks to get into CHOA, we were given the option to use a company that comes to your house and hooks everything up. No hospital! God, it was beautiful. We had received the basic results, but recently had an appointment to discuss it more in depth with his neuro. I’ve been confused in documenting his seizures recently because they often have elements of his typical complex-partials, as well as his tonic-clonics. The EEG confirmed that his CPS (which are in one area of the brain), then generalize to the rest of the brain resulting in clonic seizures. He has a couple hot spots and it seems like every EEG seems to indicates a tradeoff in which is doing the dirty work. This time they all started in the right frontal lobe in the spot where he had surgery when he was four months old. Greeeeaaat. 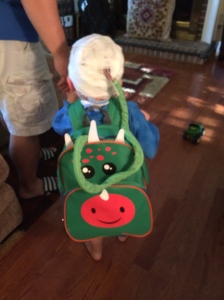 This is not to say the surgery was not done well or wasn’t successful. It made a huge difference in reducing his seizure activity. That removed tuber was the reason Connor spent 37 days in NICU at birth. But sometimes the area left that surrounded the tuber can still trigger activity. This means a second surgery to remove more of that area is an option. But the doctor already knew we weren’t interested in exploring that route, not before we try medical cannabis. Connor is currently being considered for a compassionate use trial of Epidiolex, the GW pharmaceutical using extracted CBD.

We’ve been somewhat quiet about that because we already got disappointed once. Despite Rep. Sharon Cooper and Sue Rusche of National Families in Action swearing up and down during  the last Georgia legislative session that we could all get into the clinical trials WITHIN A MONTH! JUST ASK YOUR DOCTOR! it was confirmed quickly what the families already knew. That’s. Bull. Shit.

Many families never had a shot at the trials being conducted by GW. They are focusing on Dravet and LGS. Plus, there is a lot of exclusionary criteria, such as having additional diagnoses. Many tried. Many were told no. One of those children, whose mom was assured she could get it, has since tragically passed away due to a seizure. He didn’t qualify.

Connor only has a shot because there happens to be a compassionate use trial here that isn’t limited to those two diagnoses. But it is very small, very expensive for the doctor and very complicated for a doctor to take part in due to the schedule 1 status of cannabis. So, sure, you can ask your doctor to look into this, but don’t hold your breath. However, the first time we thought we could be included, we found out Connor was excluded by GW because of his age. His doctor has since submitted paperwork to expand the age requirement and we are holding our breath for it to be approved. Sooooo, a month? Let’s see, the legislative session ended in March, so it has been at least seven since we were all told a month. And Connor is damn lucky he even has a shot at taking a part in such a small trial. Cross your fingers for him and us. Everyone else can just move to a legal state, break the law or wait the years it will take for Epidiolex to hit the market (and then hope that formulation is the one that will actually help).

Realm of Caring is also about to start shipping Charlotte’s Web, the the high CBD oil, made famous by CNN’s Weed with Sanjay Gupta. So the CBD options are slowly and fantastically coming our way, but should Connor be one of the cases that requires a different ratio of THC, we will either need to move to a legal state or hope Georgia can pass legislation in 2015 that will let us get what we need. The comfort level with CBD has skyrocketed nationwide, but THC is still demonized despite the fact that it is needed to treat many medical conditions. For now, we are hopeful that Connor will be one of the patients that responds well to CBD without the need for tweaking the ratio. It also remains to be seen how shipping the oil will play out due to the legal gray areas, especially for people in states with no legislation on the books. Certain politicians and people with authority think we should all settle for their word that they won’t prosecute us here. But tell that to Angela Brown in Minnesota who was recently arrested for giving her son CBD oil.

We’ll just be gnawing our fingernails, waiting to hear about the trial. Connor’s been having more seizures at night. His Emfit monitor was malfunctioning the other night (we were advised to adjust some settings which seems to be doing the trick), and now that I’m used to having a monitor that will alert us to convulsive seizures, I couldn’t sleep knowing it wasn’t on. I tried to sleep with Connor in the guest bed, but moving him woke him up and for the next hour and 15 minutes he appeared to be on speed. We played several rounds of “Got Your Nose” Scarface style –him grabbing mine, not the other way around. The bed and my head also made for equally sufficient trampolines. I finally gave up and had to put him back in the crib where he entertained himself for at least another hour. Life with epilepsy, ya’ll.