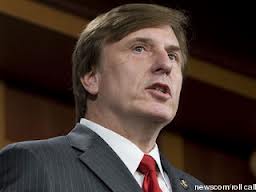 Representative John Fleming of the fourth district in Louisiana is extremely opposed to medical cannabis. While he does see a place for pharmaceutical versions such as GW Pharma’s Epidiolex, marijuana scare tactics appear to be a major part of his agenda and he has no interest in helping desperate parents save their seizing kids. He has no problem with dying children waiting while researchers fight through the tangle of red tape that is marijuana research and the lengthy process that is FDA clinical trials. Oh, those trials have been fast tracked and we can get into studies (sound familiar, Rep. Sharon Cooper?). Never mind that most of us can’t get into those studies. Connor doesn’t qualify with TSC, and even parents who have children with the requisite syndromes are unable to find openings. FDA fast tracking just means they shave some years off the years it will still take to approve it (Connor’s most effective med, vigabatrin, had its first clinical trials in 1979. It was approved in the States in 2009, years after other countries made it available).

Rep. Fleming is very, very worried about recreational use. Our children are nothing but Trojan Horses (his words) used by those who want full legalization for recreational purposes. He is so worried about recreational use and the fear that someone might find a way to use medical cannabis for fun, that he is willing to sacrifice the lives of sick and dying children. He is not interested in hearing our stories of our children that need it or those that are already benefitting from high CBD strains and THCA in legal states. He voted against the recent Rohrbacher amendment to prevent funding the DOJ for raiding state medical marijuana programs. In fact, if you try to tell him about your child on his Facebook page, he will delete it. He can’t have the public know who he’s hurting with his over-the-top antics.

It’s his Facebook page that brought him to my attention, as well as to the attention of some other parents dealing with seizure disorders. He had posted about a speech he gave on the dangers of marijuana so several of us posted on the thread. Many of our comments got deleted. Several of us are blocked from commenting further. I will say, in the interest of full disclosure, that perhaps I implied I had doubts about his abilities as a medical doctor since I came across an article about how he blocked doctors from being able to discuss the medical marijuana option with veterans because he didn’t want them exposed to an addictive, harmful substance. Yet you never see him express any concerns about the highly addictive, dangerous nature of many pharmaceuticals. Prescription pain pills are some of the most highly abused drugs, but that doesn’t concern him. But I don’t think I got deleted and banned because I might have come off as insulting (there was no swearing or name calling). I think I got deleted because I talked about my kid and about how dangerous one of his prescriptions is. (And to be clear, I am not part of the anti-pharmaceutical movement, nor do I believe that marijuana is a cure for everything or that it will work for everyone. I think pharmaceuticals have their place alongside options like cannabis. I just ask that my zip code not determine my access).

I’m not the only one. Several people who talked about their kids got deleted. Interestingly, he started debating with one of the parents–also a doctor –and did not delete or block him. However, he DID delete a link to a YouTube video that this father had made about his daughter and medical cannabis to educate the public. Interesting. Rep. Fleming is so passionate about Facebook page maintenance that he even stayed up until midnight on a Friday to edit, delete, and condescend. Yes, condescend. You may wonder why I find this particular representative so interesting when he is obviously not the only one who opposes helping our kids. Well, though I was blocked, I still found myself quite fascinated poring through his page. It became clear that his page serves no purpose but to rile people up and be divisive. It’s not even about whether I agree with his views or not; it’s that he clearly uses it as a tool of stirring discontent. Don’t get me wrong. I pretty much expect to see Obama-slamming on most GOP pages, just as there is some over-the-top Obama adoration on the pages of many democrats. But I looked over a few other pages from other parties and none gave me the same disturbing hateful feel that I got from his. I expect these pages to have opinions and criticisms. But what I found from the other ones I looked at is that I could also find positive comments about something they were involved with, or that I didn’t have to scroll far to get an idea of legislation they were involved with. Fleming, on the other hand, just seems to bitch and moan. I know his opinions, but very little of what he’s doing about it. Those posts are good and buried. I’m in no way saying he is the only one who behaves like this, but there are just too many people in Congress for me to look at all the pages. I looked at four other Republicans and four Democrats just to see if this is the norm, but saw nothing like this. All the pages are going to have rude comments from the public…the difference is that most of these other pages don’t seem as heavily moderated in that area. So when you make a point to delete and moderate heavily, you are implicitly showing support for what you leave in view.

What I found especially interesting is the way he chooses to interact as an elected official. I’m sorry, but our representatives should set an example of decorum. You are going to have rude comments on social media, and there is a line people can cross where you are well within your rights to delete. But he’s deleting to twist the story and those that get to stay, but disagree with him, get a condescending attitude the likes of which I’ve never seen.

Here are some screen shots from the medical cannabis discussion with parent of sick children. He keeps talking about legalization, though many commenters are focused on rescheduling. He’s also completely in the dark it would seem about how damaging the schedule 1 status of marijuana is on research. But he won’t be told otherwise!

This flat out lie: 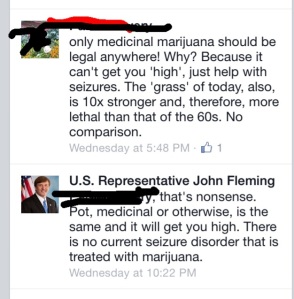 And excerpts from last weekend’s marijuana discussion in which it was necessary to talk down to and insult parents desperate to save their kids. I’d tell you to check out his page to get the full conversation, but alas he is forever editing and deleting. Who know what’s missing and edited by now.

Excerpts with one dad. 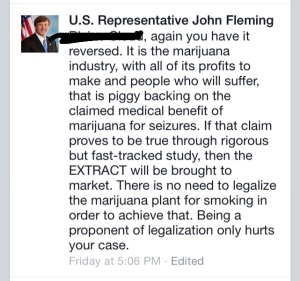 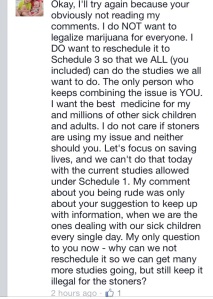 Excerpts with another dad. 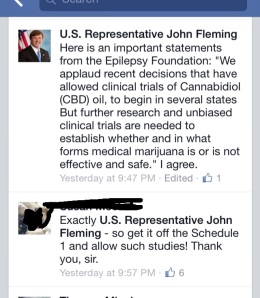 Please keep up with developments? Really? By the way this dad is the doctor I mentioned earlier. The other dad’s response to Fleming’s endless egocentrism. 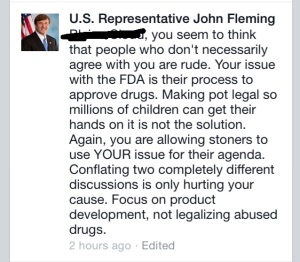 Once again, Dr. Fleming, learn the difference between rescheduling and legalization.

And the one I take very personally because this mom has a child battling the same disorder. (Update: Since I first posted this, Rep. Fleming has removed all the comments by this mother, yet left his own responses). 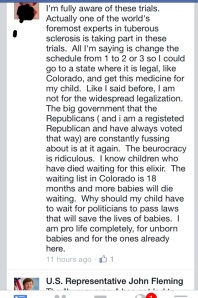 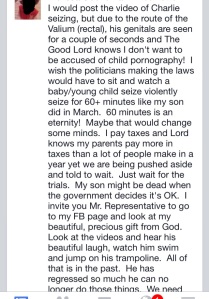 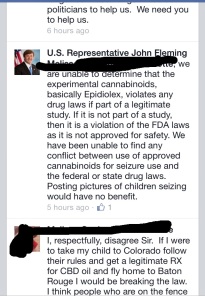 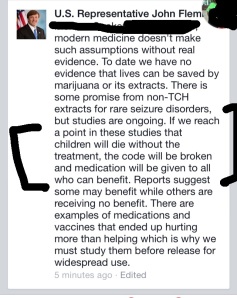 I simply must interject here…They will just GIVE US the medication if our kid is going to die? Just like that. Anybody remember Josh Hardy who made the news last March? He is seven. The pharmaceutical company denied him compassionate use. They didn’t reverse their stance until the public pressure became too overwhelming. Rep. Fleming truly lives in his own world–a world where pharmaceutical companies give people drugs when we say “pretty please with sugar on top.” 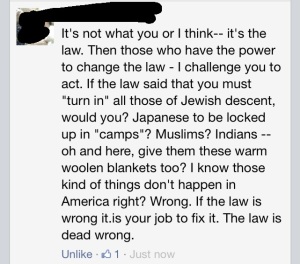 Not one ounce of compassion in that entire thread.

For the love of God, why can this man not make the distinction between legalization and rescheduling?

Yeah, pretty sure we explained that (in now deleted comments) that this wasn’t an option for everybody and some kids will be dead before Epidiolex goes to market. Not to mention, Epidiolex is one particular formulation. It’s not necessarily the same as what some of the kids are responding to. It may work for some, but others will need whole plant medicine. 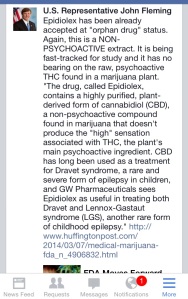 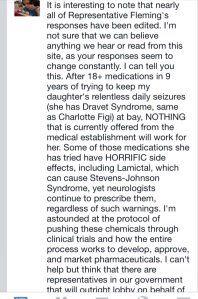 So some of the parents got to stay and debate with him. I guess those of us that were deleted didn’t have anything constructive to say. So in the interest of helping others, I’m going to share some screenshots I took from other threads on different topics so that you will know what Rep. Fleming considers positive contributions to the discussion should you wish to engage without being banned. And please know that in an older thread, he has stated that cursing and name calling won’t be tolerated. But I guess that’s only if it’s about him.

Though some who don’t know me may assume I’m targeting him because of his party, that is absolutely not the case. If he had come to my attention as a Democrat behaving in this manner–I’d say the same (I float somewhere in the middle annoyed by extremes on both ends). He’s a perfect example of what we don’t need in D.C. making decisions for people. Someone who makes it very clear that he can’t and won’t work with his colleagues unless they tow his line and won’t listen to the other side of the story. He’s there to represent his own interests. I actually found in Georgia that the bipartisan support for our kids was amazing.

But perhaps I’m being unfair. He does get his information from reputable sources.

Plus, Rep. Fleming has but this one request. 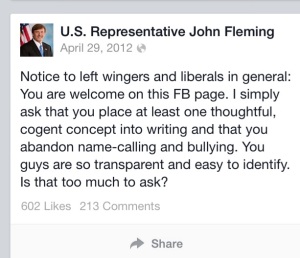 Of course, don’t expect HIM to abide by it. 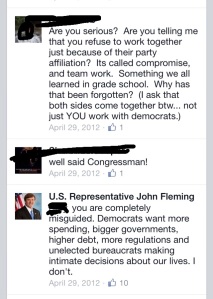 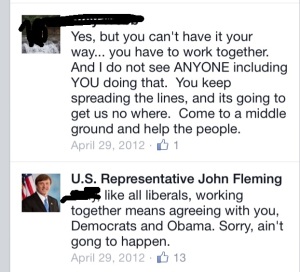 He really can do it all. He gives grammar lessons. 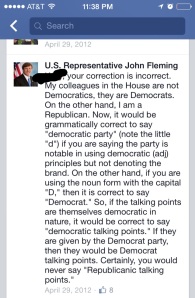 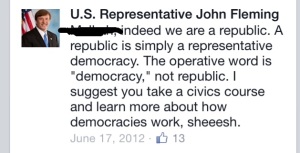 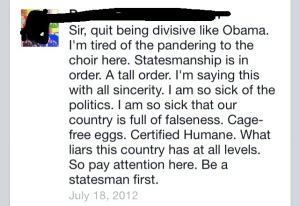 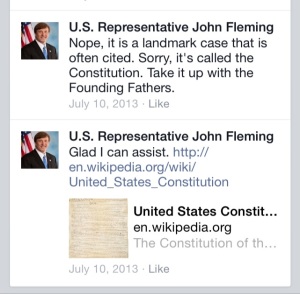 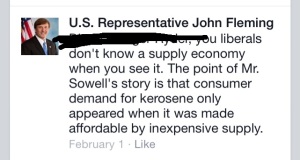 He gets by with a little help from his friends.

I just wish he cared as much about the kids that have been born as he does the ones that are in utero.

We all have our beliefs and biases, and hey, I don’t necessarily like all the people being referenced here either, but if this is how you think a United States representative should conduct himself, you need to reassess.

Please check out this YouTube response some parents put together for him.