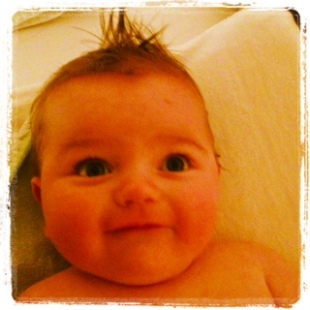 Has someone ever pointed out a new car model to you that you’d never seen before and suddenly you saw it everywhere you went? That’s kind of how I feel about sick children. Now that we have to contend with Connor’s health issues, I feel like everywhere I look I see people with sick kids. It’s a cruel, messed up world if the countless prayer pages for children on Facebook are any indication. Not to mention the time I’ve spent in hospitals seeing other people’s children wheeled around with tubes sticking out of them or minus their hair. Sometimes I think if I’d had this awareness before I got pregnant, I never would have had a kid at all. But now that he’s here, I wouldn’t give him up for anything. I just hope there really is something better waiting for us all in the end, or I’m going to be really ticked.

So what is TSC? Tuberous sclerosis complex is a rare multi-system disease that can cause benign tumors to grow in various organs including the brain, heart, lungs, kidneys, eyes, and skin. It CAN cause retardation or learning disabilities, autism, seizures, behavior issues, OCD, ADHD, kidney issues, lung problems and skin lesions. But every individual’s course with TSC is different. There is a full range of the severely afflicted that need constant care to those who are so mildly affected they may not even know they have it until they have a child who presents more severely.

I’ve heard many describe it as walking through a minefield. It’s a pretty apt description. We basically have a long list of things that MIGHT happen. Or they might not. Seizures. Check. Been there, done that. He started having complex partials the day he was born. Although I’m thrilled to say we haven’t seen any since surgery and none were on his most recent EEG. We are currently contending with infantile spasms, a very rare form of epilepsy seen in children, although more frequent in TSC. He’s been on Sabril for about a month now which has helped considerably, but he still has 1-2 breakthrough clusters a day which are much, much milder than what he was having. These are scary though because even though he will eventually outgrow them, they have potential to be extremely damaging and cause regression. Fortunately we’ve seen none of that and he continues to progress. We’re still working with the neurologist to get these under control. I’ll go into these more in a separate entry.

But that TSC minefield I mentioned? It means that even though the spasms will eventually go away, and even though the surgery was successful, there is no guarantee for the future. Some people’s seizures go away for good, some go 2, 10, 20 years before it happens again.

Currently we’re lucky (lucky in the most screwed up sense of the word) because we’re only dealing with brain involvement. His cardiac rhabdomyoma we saw on the ultrasound cleared up by three months old. They told us it would happen by the time he was in his early teens, so we like to think that it happened so quickly is a good sign. I just wish all the organs worked that way.

His kidney and eye scans at birth came back clear. Both have been checked again in the last month and remain clear. Lung involvement is rarer in males (thank God for small favors), but can be very problematic for females (Google LAM). He also doesn’t show any signs on his skin. The eyes may show signs of TSC, but rarely affect vision (the boy will have glasses anyway thanks to his parents). But for the rest of his life he will require annual MRIs of the brain and kidney scans so that if there are any life threatening growths, they can be treated immediately with some of the amazing new medications that have come about in the last decade for TSC or by surgical intervention.

Why does he have it? After meeting with a genetic counselor after his birth, the thought was that he is most likely a case of spontaneous mutation, as are the majority of cases. There was nothing in our family histories to indicate that it has been passed down. That being said, unless Chris and I undergo genetic testing, we can’t be 100 percent sure neither of us has a mild case of it. Indeed, one of us COULD be a spontaneous mutation and passed it on to him. It is a dominant gene, so if you have it, your children have a 50 percent chance of inheriting it. The degree to which the parent is affected doesn’t foreshadow the degree to which a child will be. We don’t currently plan to have any more children, so we probably won’t be tested. Chris has no desire to know, and although I’m curious, I don’t know how I would handle that information. It sure makes you analyze yourself, though. Is TSC why I’ve had anxiety since elementary school? It this why Chris makes the bed military style and is constantly angling everything in the house just so? At any rate, I’m probably forever cursed to wonder if I could have done something different. I know I didn’t DO something wrong, but the questions are there. What if I had spent the last few years eating organic? Did I expose myself to something environmental somewhere along the way?

We simply don’t know what lies ahead, so I focus on this sentence from the Mayo Clinic website: “With appropriate treatment, however, many people who have tuberous sclerosis lead full, productive lives.”

4 thoughts on “So what is this thing that has changed our lives?”