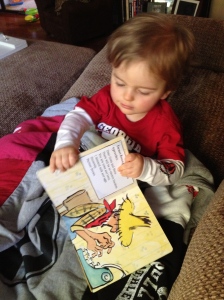 Sigh. I really hoped this wouldn’t be necessary, but the last increase in Onfi didn’t make much of a difference and we’re still at 1-4 seizures most days. I e-mailed his neuro and asked if he thought there would be any point to another increase, or should I just bite the bullet and move forward on the diet. I knew when I sent it what the answer would be since he had brought up the possibility of the ketogenic diet a few weeks ago. I was relieved that at least he thought modified Atkins was a reasonable alternative to keto. Not that I think MAD will be easy, but just the thought of keto intensely overwhelms me.

I keep reminding myself that if it works, it’s worth the extra effort, and if it doesn’t, we only do it for a few months. We”ll be meeting with a nutritionist at the CHOA keto clinic to start.

But if it doesn’t work…then what?

We’ve tried seven different medications, and even more effective cocktails only decrease seizures — they don’t stop them altogether. Sure, there are more meds we haven’t tried, but as I shared in my previous post about medical marijuana:

…less than 1% of patients who failed to respond to three anti-seizure drug regimens achieved adequate seizure control on subsequent drug treatments even though some were treated with as many as nine different drugs or drug combinations. -WebMD

I’m going to start this diet fully optimistic that it will work. Because if it doesn’t, the other options are to explore surgery again or live with the seizures. Sure would be nice to have the option of pediatric cannabis in Georgia. Please watch this clip from The Doctors in which Paige Figi explains what a miracle it has been for her daughter with Dravet Syndrome.

I am also seeking guest posts from people who are either legally using medical marijuana to treat their children, or are seeking it’s use — possibly entailing a move to another state. E-mail pin.the.map@gmail.com.

Petition for legalization of medical marijuana in Georgia.

2 thoughts on “Looks like we’re trying the modified Atkins diet.”