I can’t believe Christmas is over already. Seems like it was Halloween a week ago. Connor had a good Christmas, despite some not so fantastic developments beforehand.

I blogged previously about his bout with bronchitis and I mentioned that instead of an increase in seizures, which can happen in times of illness, he had a major decrease. Turns out many other parents have experienced this when illness causes their child to stop eating much. Hopefully, that’s a sign that the ketogenic diet will work for him. Did I say ketogenic and not modified Atkins diet? Yes, you read that correctly and I’ll come back to that.

Turns out, a week and a half almost seizure free wasn’t worth it because once he recovered and started eating again, they came back with a vengeance. They were longer, rougher and he was wobbly for a bit afterwards. His seizures for the last several months have topped out at 30 seconds. Now they were lasting two minutes. And they looked…odd. I sent a video to his neurologist who called me with the %&*# news that Connor’s seizures had morphed into tonic-clonic (grand mal) seizures. Now, I knew they were rougher than the partials we have always dealt with, but you can read descriptions all day long of seizure activity and it still may not look exactly as expected. So they were rougher, but still not as rough as the grand mals I envisioned. I was shocked and not shocked at the same time.

So damn. A new seizure type. Common in TSC, but we had been lucky to go so long without that turn of events considering Connor’s seizures started at birth. Until now, other than partials, his only other confirmed seizure type was infantile spasms. I have sometimes suspected absence seizures, but those are tough to peg.

Shortly before this development, his neuro had changed his mind about the recommended course of action. As I mentioned in another post, we were trying to get him into the Children’s Healthcare of Atlanta at Scottish Rite or Egleston ketogenic diet clinic for consultation regarding modified Atkins and seizure control. They couldn’t get us in until March, four months out from when we sent his records over. It took a month for them to even make the appointment, and our neuro was quite perturbed that after a month of trying to get started we had gotten nowhere and had three more months to wait. He did not say this, but my guess is that he was on board with MAD when he thought we’d be able to test out the efficacy quickly. Now, that we are facing several more weeks of seizures, I suppose he wants to take a more hardline approach. With the appearance of tonic-clinics, I’m very much on board now, whereas before — I was NOT thrilled with the idea of keto.

So we have continued our efforts to get in earlier at CHOA and they also referred us to Johns Hopkins and UAB in Birmingham, which also has a TSC clinic.  Johns Hopkins also can’t get us in until March. So far UAB is the winner with a date of Feb. 4. So unless we get a miracle at CHOA, we will drive two hours to Alabama, which is preferable to flying to Baltimore.

In the meantime, we have upped his vigabatrin, something we were trying to avoid. His seizures shortened again and were less severe, though they still leave him wobbly. Most days he’s had one. Until two days ago when he had five. Yesterday he had one that left his right arm almost useless for 30 minutes after.

But on a happier note, Connor sure cleaned up at Christmas. We opened gifts at home in the morning with Chris’ parents who were in town, then headed to my parents for the afternoon and dinner, then stopped by Chris’ brother’s house where Connor went hog wild with his 10-year-old cousin Cody and their dog.

We can now start a family band, hopefully less annoying than Laughing Pizza, with Connor’s new keyboard, drum and xylophone. I continue to live vicariously through him by getting him a tent for his playroom (I can’t wait until he’s old enough for the Power Wheels I never got in the 80s). One of the gifts my parents gave him is the rideable airplane from Cars. He likes it until he accidentally triggers the mechanism that makes it light up and make noise. He takes off like a bat out of hell, so I suppose I will remove the batteries for the time being so he can play with it without fear of being eaten or chopped up or whatever it is he’s afraid of. He otherwise adores spinning the propeller.

The Christmas gift exchange between Chris and me was rather perilous…for me. Chris is not a “stuff” person. If it were up to him, we’d have a lot more bare square footage in this house. He always makes a list, and I always feel compelled to find at least one thing not on the list. However, I’ve completed his collections (that I started) of Chicago sports team Mr. Potato Heads and garden gnomes. I knew he wanted the Lego Rockefeller Center for his office, so score! An off-list item. Except when I got home, I made the mistake of asking for the updated Christmas list since I had only looked at his November birthday list. Guess what he had added? Dammit. So I gave it a shot by picking him up a button-up shirt at Belk. I stuck to his beloved Izod, but veered from his color palette. I knew there was a 95 percent chance of exchange. Mine’s on the left, his exchange is on the right.

For me he did a good job with three necklaces he picked out on his own, in addition to some Loft clothes I picked. He also got silly with this, which surprised me because my excessive mug collection drives him bonkers. 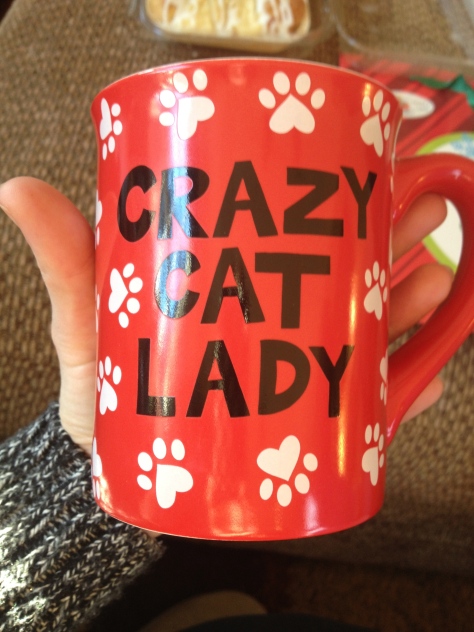 He also picked up a cow chip clip that moos loudly, as I am obsessed with black and white cows and hold to a belief that if I can get it out of the pantry with no one knowing, the calories don’t count. Massive backfire on his part. The thing is so sensitive, that even after being buried in drawer, open the fridge — MOOOOOOO!. Pour some milk — MOOOOOOOO! Turn on the sink — MOOOOOOOO! Then on New Year’s Eve it went completely batsh** and wouldn’t stop mooing even when we were sitting on the couch partying hard with VH1’s Happy Endings marathon surrounded by laundry (jealous?) I was upstairs when I finally heard Chris lose it and yell, SHUT UP! I heard a drawer being yanked open, so I rushed down to save my cow from possible obliteration.

I’m also thrilled to say we made it through all of 2013 without one hospitalization! Since Connor will be admitted in order to start the keto diet, we will not be able to say that of 2014. 2012 gave us five weeks in NICU, a brain surgery and an in-patient VEEG. Here’s hoping we all have a medically uneventful year.

One last thing — please keep in your thoughts that one of our newer TSC families entered our world of seizures last night and had to welcome 2014 in the ER. I’m hopeful they will quickly find seizure control. He’s doing well I understand.

I was contacted by Dave Terpening Insurance Company to be part of their “I Was Thankful for Insurance When…” post on their blog. I love any opportunity to get the word out on TSC so check it out here. 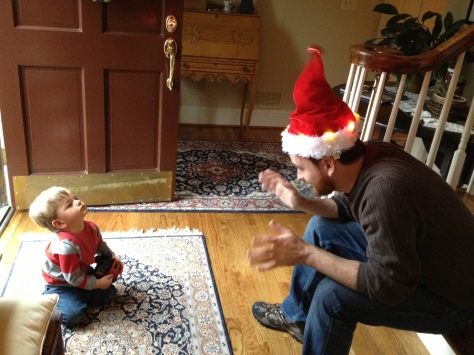 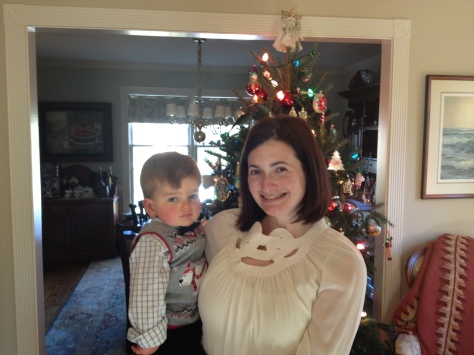