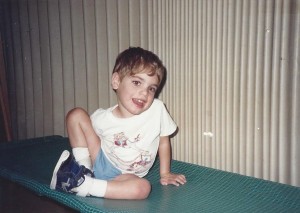 In March of 1985, our second son was born.  Adam was the baby I could relax with, knowing a bit more the second time around.  But by May, Adam was hospitalized with his first seizures and flown from our local hospital to Children’s Hospital of Philadelphia where he was diagnosed with tuberous sclerosis.  No one in our family had ever heard of this disease.  No one had ever had seizures.  Our world felt like it had blown to pieces.  His four-year-old brother, Ben, felt like he had caused the baby’s illness because he had been so jealous.  Ben began to act out and we sought out counseling to help him and us.  Slowly over that summer, we started to try to find some kind of normal – going to the local mall, taking Ben to his swim lessons and so on.  We waited anxiously for Adam’s early intervention program to have his spot available in the fall, but before we could start – Adam was back in Children’s Hospital with infantile spasms.  The next three years were nothing short of awful as there weren’t the kinds of meds back then that are around now.  We never really got control of the infantile spasms and he went from a smiling baby at 4 months to a lump that didn’t cry, didn’t coo, and didn’t roll over…just laid where ever he was placed and kept on having seizures.  That was our beginning…

Fast forward two years and Adam is five.  The infantile spasms are fading out although his “Heinz 57” varieties of seizures are still around.  But he’s no longer in the fog of IS:  he smiles, has a beautiful face and people fall in love with him easily. He’s learned to sit and crawl. He’s standing but hasn’t taken that first independent step yet.  My husband and I hire his early intervention teacher to do respite with the boys overnight so we can celebrate our 10th wedding anniversary at a nice hotel.  When we get home the next morning, Adam greets us by walking independently around the corner!  Stinker took his first steps while we were away!  It was the best present we ever received.

Early intervention those first five years helped Adam and our whole family to survive.  We learned to hope and dream of a future, not just of limitations but of having him experience as much of a normal life as his older brother with the same opportunities and experiences – adapted Adam-style.   It wasn’t going to be easy but nothing worth doing ever is.

The first big “normal like Ben” goal for Adam was to attend weekend religious school at our synagogue.  There were no other children with special needs in 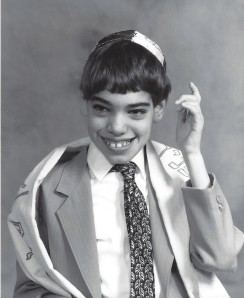 the building and our rabbi wasn’t so good at “getting Adam.”   Luckily I’d met another Jewish mom in town whose son was a couple of years older, also non-verbal, who used a wheelchair.  I talked her into joining and we started our own class with our boys.  About the same time I volunteered to serve on the synagogue board of directors because the best way to make things happen is to become a decision-maker with a voice and a vote.  Then the rabbi who didn’t get our kids took another job in another city and the search committee started looking for a new rabbi who would be willing to do Bar Mitzvahs for kids with special needs.  We got a great one.  Our boys started studying extra with the rabbi, listening to Bible stories, handling ritual objects, and being recognized in front of the entire religious school just like the rest of them.

At 13, Adam had his Bar Mitzvah and it was wonderful!  He loved Jewish music, so we hired a Jewish folk singer who wove music throughout the service.  Adam is non-verbal so he couldn’t lead the service like a regular Bar Mitzvah boy would.  Instead he worked for two years to be able to hold a special wine cup upright throughout an entire blessing without putting it down or spilling it.  He learned to hold and “hug” the Torah scroll on his lap without letting go.  Being non-verbal he couldn’t read from the Torah in Hebrew so his brother read for him.  This was special – no one is allowed to touch the Torah scroll where the Hebrew is written.  One uses a special pointer to follow along.  Big brother Ben held the pointer and Adam’s hand at the same time as he read so that Adam could “read with him.”  To keep Adam from fidgeting, Ben used one finger to tickle Adam’s palm because it calms him — all while they were doing the Torah reading.  The sanctuary was full and there weren’t too many dry eyes in the house.  We followed it up with a great party and Adam definitely knew he was the guest of honor!

Adam went to a special needs summer day camp from the age of 8 to 21 and had lots of fun.  Swimming wasn’t his thing but music time was.  He participated in programs as a teen where he got to hang out with another teen or college student and do regular teen things.  He went to four proms and had a date for each one of them!  He discovered blondes… :)…he really likes blondes.

The summer after aging out of school at 21 was scary.  A rare malignancy was discovered in his colon.  Surgery to remove half of his colon and three weeks in the hospital with complications followed.  He was down to 85 pounds and took a good two months to recover.  Then it was time to begin his journey into the world of adult services.  We did not want Adam to be inside four walls all day in a sheltered workshop environment.  So he became one of the first participants in a new pilot program taking individuals with severe 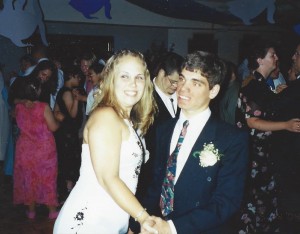 disabilities out into the community as volunteers.  He helped with Meals on Wheels – his staff would drive the car and knock on the door; Adam would hand the lunch to the senior citizen.  He made lots of elderly friends on the route.  He worked in local libraries, pushing the books onto the shelves (with hand-over-hand support by staff).  He was a busy young man and enjoyed being out and about in the community.

Through one of the programs, Adam met Matt who is also non-verbal and has autism.  Just picture two non-verbal guys making eye contact with each other and laughing and insisting on sitting together every day at lunch.  The program staff told me about how great they were together and said, “They should live together.”   I sent our contact info home in Matt’s backpack and his mom called me.  We started to get the guys together on Saturdays for pizza and we began to talk about the possibility of them living together.   News traveled through the system about these two guys and how great they were.  The head of the county intellectual disability department called us, said he’d heard about these two and were we ready for Adam to move into his own place with Matt?   Adam was 24 and we said yes because one of our dreams was that Adam would live with a friend, not just in a place where there happened to be an opening, but with someone he truly liked.  He’s lived there since 2009 and he loves it.  He’s thrived there, gaining in independence and doing things there that he’d never do for me at home!  He’s in a community he knows well, having grown up there.  We are able to keep an eye on things and be involved while we are still healthy and able because we’re in our 60’s and none of us live forever.   As parents our job is to give our kids “roots and wings”.  Big brother, Ben, went to college, started a career, got married, and bought a house.  Adam has his jobs, social life, and lives in a house set up just for him and Matt.

I mentioned that Ben got married.  Guess who was his Best Man?  Adam beamed with joy throughout the entire wedding weekend.  And boy!  Were they both handsome in their tuxes! 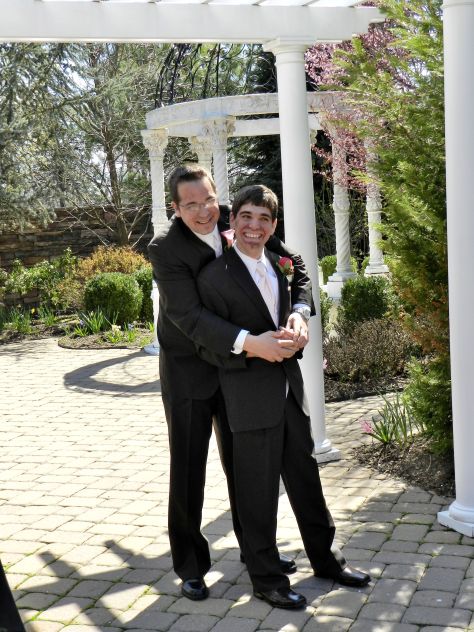 Finally, it’s important to know that we went through really hard times with his tuberous sclerosis, just like a lot of you.  Recently he was diagnosed with Crohn’s disease, totally unrelated to his TS, so he gets two chronic illnesses to deal with and it feels really unfair.  There have been times over the years when I fantasized about throwing my suitcase in the car and heading west and never looking back, but I never did.  Instead we used counselors, behavior therapists, doctors, teachers, compassionate friends and family to help us get through the worst.  Now after 29 years, I see what our family has accomplished and I know we more than survived, we thrived.  We are all better people because of having Adam, TS and all, in our lives.  So keep dreaming of possibilities for your kids – you never know what you can achieve!

One thought on “It isn’t going to be easy, but nothing worth doing ever is.”