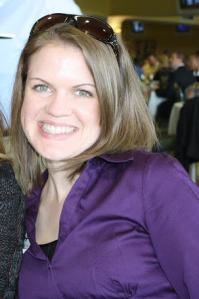 On a lovely day in the spring of 2009, my husband and I walked through the doors of the Tuberous Sclerosis Clinic at Cincinnati Children’s Hospital.  I was, on two previous occasions, accompanied by my mom, but this was the first time for my husband to come with me since our wedding in 2008.  After checking in, we went to the waiting area where I saw the usual scene: a handful of patients, mostly children, accompanied by their parents.  Some were in wheelchairs, some were sprawled out on the floor playing with toys, and the moms looked on with such evident love and care.  We found some empty chairs in a corner of the room, and as we were sitting down, I noticed a woman sitting alone.  She wore a red shirt, black shorts, and had the familiar signs of someone with TSC.  I have two noticeable patches of angiofibromas on my face; this woman’s face was covered.  I struggled to peel my eyes away from her, not because of the angiofibromas, but because of the sadness that pierced my heart upon seeing her.  This adult woman was all alone at the clinic.  No loved ones accompanying her, no child in attendance, no spouse there to hold her hand.  Mixed with the sadness was an overwhelming sense of gratitude as the thought struck me – I’m not alone in this. While I so often dwell on the negative aspects of life with tuberous sclerosis, I take heart knowing that with each step, with each turn of the page in this story, I’m not alone.

My mom describes the spot on my face as a red, vein-like mark when I was born that developed into a strawberry-shaped patch by the time I was in grade school.  The area on my neckline developed over time until I was in junior high, and the shagreen patch on my back started appearing and spreading over the course of those same years.  My childhood involved occasional treks from doctor to doctor trying to get at least some idea of what these things were on my skin.  Anytime we would visit yet another doctor, the response was either a blank stare or the man awkwardly fumbling through his ancient medical tome.  Each visit ended the same, with my mom sighing and us returning to the parking lot with questions still unanswered.

Fast forward a few years to my early twenties.  I graduated from college in 2004, and spent the next year deciding on what the next phase of life would entail.  After weighing different possibilities, I opted to pursue a masters degree in counseling. My then-boyfriend-now-husband and I individually decided to apply to the Southern Baptist Theological Seminary in Louisville, KY, where he would receive a Master of Divinity in pastoral studies and I would work towards my Master of Arts in counseling.  Just prior to our move in the summer of 2005, my mom informed me of a new dermatologist she was seeing and suggested that I make one last attempt to see if he might shed some light on my skin abnormalities.  She accompanied me to the doctor’s office, and the difference from previous doctor visits was remarkable.  Within ten minutes of him looking at my skin and fingernails (a couple of my nails have visible tubers underneath), he looked me straight in the eye and said, “I’m pretty sure you have tuberous sclerosis, more commonly referred to as TSC or TS.”  He then ordered a biopsy of the shagreen patch on my back.  Just like that, days later, I had an official diagnosis.  The dermatologist didn’t want to overload me with information, but gave me a few pointers and places to begin my personal research.  He also recommended lining up a variety of doctors after moving to Louisville to begin the process of having additional tests run.  A few months after the move, once I was a settled and had medical insurance in place, I researched dermatologists in the area and was able to get an appointment fairly quickly.  The dermatologist I met with confirmed the TSC diagnosis, and ordered scans for my heart and kidneys, as well as an MRI for my brain.  Up until this point, all had assured me that these tests are protocol.  I was given the assurance that medical concerns were pretty minimal as I was in the small percentage of individuals whose manifestations of tuberous sclerosis are limited to the skin abnormalities.  The scans of my kidneys, heart, and lungs came back clear, so the doctor assured me that I could wait several years until being tested again since there weren’t any concerns.

The same dermatologist called me one evening after two weeks of waiting for the results of the MRI.  I was scheduled to be in a night class on campus, but all plans for the evening came to a halt when the phone rang.  I could hear the hesitation in her voice. The radiologist found a tuber on my brain roughly 5mm in size.  While the spot was not of extremely considerable size in and of itself, the location was of concern.  There was also the question of whether or not it would continue to grow since this was my first MRI at 23 years of age.  The dermatologist then strongly advised that I get in touch with a neurologist, and also instructed me to have an MRI performed every six months to a year for the next three years so that we could detect whether or not the tuber would continue to grow.  The weight and uncertainty of such news was paralyzing.  What if something goes undetected?  What if I develop additional tubers elsewhere?  The questions came to mind like rapid fire as I sat in shock on the couch in my living room.  I will never forget the quiet that came over my apartment after hanging up the phone.  It was as if the air in the room had escaped and I couldn’t move.  My boyfriend came over and spent the reminder of the evening at my side.  I don’t recall having ever wept as much as I did that night.  However, once the tears finally ceased, I again recall the stillness.  Only this time the stillness was accompanied with a sense of peace.  Not only did I have the comfort of my boyfriend’s presence there with me, but I knew in that moment that I was in God’s care.  All I had ever known and been taught came into focus as I was reminded that God knew this day before it happened, that I was His child, and that I could rest in His care.  That assurance—as frail as it seemed in the moment—was the only thing that prevented me from falling over the cliff into despair.

Over the course of the next year, I was lined up with a neurologist in Louisville who referred me to Dr. Franz at the Tuberous Sclerosis Clinic.  In 2006 and 2007, my mom and I took the short day trip to Cincinnati and met with the clinic staff.  The more I met with the team of doctors there, the more helpful information and encouragement I received.  While there were still very real concerns with my diagnosis, I had a bit of assurance knowing that my case was so minor.  More and more research showed that many patients have far worse ordeals to face in contrast to my own struggles.  The additional MRIs indicated that the tuber in my brain had not grown, therefore, doctors felt it safe to wait several years until ordering the next scan.

Two short months after marrying my husband in 2008, I had a malignant tumor removed from a salivary gland in my mouth.  While the link to TSC wasn’t certain, the nurse at the Tuberous Sclerosis Clinic said there was still the likelihood that it was related.  My husband and I were deeply relieved when we learned that the tumor was fully encapsulated, and further tests or treatment weren’t necessary.

I made the decision in 2011 to have a CO2 laser procedure performed to try and remove some of the angiofibromas from my face.  After having the procedure once in 2011 and again in 2012, I can’t say that much has changed.  The dermatologist who performed the laser procedure informed of the possibility that there wouldn’t be long-term results, and she was right to warn me in advance.  Skin tends to have a mind of its own, and the tissue is going to respond to a laser as it will.  While I was quite disappointed with the lack of results, I can at least say that I tried.  There is also always the possibility of trying a different doctor or researching whether or not a different procedure would be a possibility.

We moved back to Texas this past January, and with that will likely come finding new doctors and perhaps scheduling the next round of scans in the near future.  I am amazed that over seven years have passed since this journey first began!

The greatest blessing through this journey has been my husband.  I recall sitting with him shortly after receiving the news of those first MRI results, and him feeling utterly powerless to fix me.  He wanted me whole, free from sickness and complications, and he was powerless to change the situation.  And yet, he stayed.  When I told him soon after that he was free of this burden, under no obligation stay with me long-term, he chose to stay.  We entered into marriage knowing the difficulties we would face.  He chose to marry me knowing that our “normal” would look very different from everyone else we knew.  We had to have conversations early on that many couples we know never have to face.  We aren’t asking the question “Can we have kids?” but instead “Should we have kids?”  My husband is adopted, and the relationship he has with his parents encourages my heart.  They chose to take him in as a newborn orphan, giving him a home and name, which displays so beautifully the love that God bestows on His children.  Even before my diagnosis, we knew adoption would be on the table if we ever got married.  While we long for children, and while I have days when I long for that experience of carrying a child, we know that God has the plans for our family in His hands.  Any child we welcome into our home will be a gift, and at this point in our life together, we do feel compelled to pursue adoption.

God has blessed me in ways that often move me to a humble gratitude.  Nothing I have been given have I deserved.  I am surrounded by family and friends who support and encourage, most of whom respect our decisions pertaining to how we will eventually grow our family.  And I quite honestly don’t deserve my husband.  He loves me despite my imperfections, despite the ongoing, open-ended questions related to TSC.  He knew our family would likely look different than that of others, and he married me in spite of all of that.  My husband is a daily reminder that I am never alone.  I cannot be driven to despair over TSC because of the Hope that supersedes all pain and sickness that come with this life.

For those of you reading this who have the support of loved ones around you—Praise God for that, and praise Him that you have such tangible evidence of His care and comfort.

For those of you who—like the woman in the waiting room at the TS Clinic—are alone in this, I pray for you.  I pray that you will come to know the hope and comfort from the God who will never leave you alone~