I have not used our Seizure Tracker app for three days. We have had a few seizure-free days here and there since I started tweaking his diet a couple months ago, but three days in a row isn’t so common and is pretty exciting. I’m not gonna get ahead of myself and say there won’t be future break-though seizures , but I’m so relieved to know diet therapy is truly helping. It does NOT work for everyone, so I’m thrilled that it is working for Connor.

If MAD does do the trick, it saves us from moving on to the more extreme ketogenic diet which would force me to become an organized planner, the absolute antithesis of what I am.

To be honest it hasn’t even been hard due to Connor’s delays. Since Connor is still a bit fickle about textures, he has never developed a taste for a lot of the stuff other two-year-olds have. He doesn’t eat chips and cookies. A good portion of his diet is is still pureed and I rely heavily on baby food portions of meat and vegetables. Since he’s picky about more solid food, I also buy prepackaged portions of chopped carrots  and green beans that are soaking in water and softened for him so he can transition to more texture. I also buy boxes of chicken nuggets without breading and meatballs. Basically, everything is already portioned out with all the nutrition info on the side. So it’s easy to keep track of his allotted 10 net carbs a day.

I started tweaking his diet a couple months when we were trying to get in somewhere to start the ketogenic diet–only to discover most hospitals take months to get you in. For a long time I just reduced his carbs, but didn’t stick to a particular limit. I just avoided pastas and gave minimal fruit. It seemed to help a little, but seizures were still almost daily. As I read more about it, I started giving him half and half occasionally instead of milk. Then, a couple weeks ago, after checking in with a nutritionist, I started stirring olive oil into his food, and switched from milk to heavy whipping cream mixed with water. I try to spread his carbs and fat evenly through the day. There is no specific amount of fat required–just “liberal use.” To figure out the 10 grams of carbs, I just look at the nutrition info and subtract the dietary fiber from the carb count because those carbs don’t count. I bought book that goes in my purse listing nutritional content of food for the process of getting him to eat more table food. Then I went to Walgreens and purchased Ketostix. Those are used to periodically check his urine for ketones. If the diet is being done correctly the color of the strip should reflect moderate to large ketones. The first time he had small, so I worked on spacing out his fat intake and his last two checks revealed large ketones in his urine. Ketones are what is left behind when the body starts burning fat for energy instead of the glucose from the carbs most of us run on.

Checking the urine of a kid in diapers is super fun. A book had recommended using cotton balls to soak up urine and squeeze it onto the strip. The writers apparently haven’t had much experience with today’s super absorbent diapers because I have to tear through the lining and stick the strip into…whatever that stuff is that spills out of a torn up diaper. Things that would have made me vomit before a kid.

One of the first changes we saw a few weeks ago was that his random seizures during the day were significantly reduced. But waking up was still a big trigger for him. I knew I would see one almost every morning and after nap. But even those have reduced, and I have seen none for three days. He even woke up twice this afternoon–mid-nap and at the end of the nap. I watched closely. No seizure!

Plus, when he was weighed recently he came in at 30 pounds. Last time any med changes were made, he was 27 pounds. So we are seeing this improvement, even though his meds aren’t calculated at his current weight. It would be so amazing to get him off one, if not both, meds. Fingers crossed.

Here are some photos from Disability Day at the Georgia capitol the other day. Several parents went to represent HB 885, which we hope will pass and move this state toward allowing people to access the medicine they need. 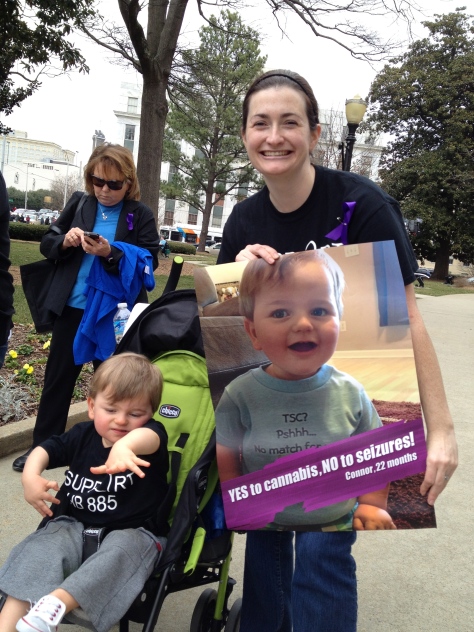 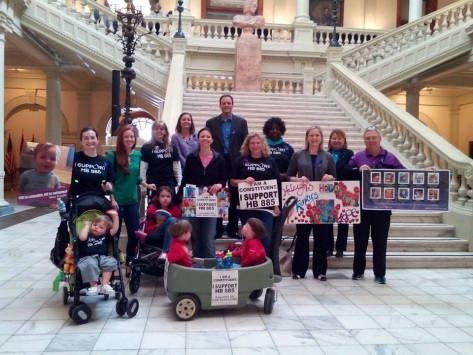 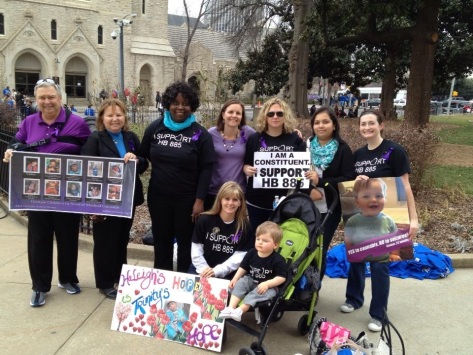 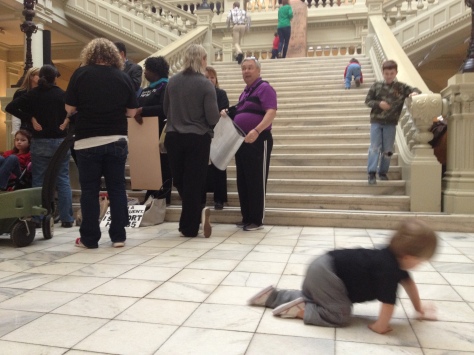