My story begins in 2005. I was 20 years old and I had just started dating my husband. We had talked about it and I knew he had TSC when we started dating. I was aware that he had seizures daily and that he had a kidney removed at age 20. That was all I knew of TSC and I accepted all of it. Then I got pregnant. We didn’t know at the time that there was a 50/50 chance the baby would have it. I was not the most careful and I didn’t go to the doctor the first time until I was 16 weeks pregnant. We asked the midwife if she knew anything about TSC and the risk to the baby and she thought it could be like other genetic disorders where both parents needed the gene in order to pass it on. We scheduled our first ultrasound and left that day feeling pretty happy about things. At that ultrasound we were excited to see what we were having and had no idea what was to come that day and what would follow. The technician did the ultrasound and told us it was a girl, which was very exciting for me, but then she promptly left the room. I was scared and had no clue what to think about what was happening to me and my baby.  The doctor came in and went over all the pictures again and saw a giant tumor on the baby’s heart. He sent us from there to another hospital and genetics. On this day that I was so excited for I was told something heart breaking — and that was not even the start of it. We sat at a giant table surrounded by doctors as they told me all kinds of information that I cannot remember. All I wanted to do was 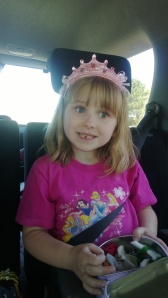 cry. My baby was diagnosed with TSC and I was in and out of the hospital for tests weekly. There was a 10% chance the baby would survive and I took that chance and kept the baby. We did all the appointments, and in the  meanwhile, I was working. I had no idea what was to come and how much this would change my life forever. The weekend of September 11th in 2005 I was at a festival and felt like I couldn’t breath. I was getting no air in my lungs and could not take a deep breath. I called the doctor who told me to come right in and they would take a look. Everything from that point on is a blur in my mind and just small pictures but I can tell you what happened from others’ accounts. I was admitted and put on oxygen immediately. I was dying of heart failure as was the baby growing inside my stomach. My lungs were drowning in fluids and I had preeclampsia. I lost the baby and almost lost my life at that point. I had what was called a peripartum cardiomyopathy  cause by mirror syndrome. One would think that I would have given up on having a baby with my husband at that point. Not me. I wanted a baby and I wanted it with my husband.

In 2007 I got pregnant again. The doctors followed me for my entire pregnancy and at my first ultrasound all looked well. They told me I should come back in a month and check to make sure all was still well. I was happy that all look good, but when a month came around I had to fight to get that ultrasound. I eventually was able to get it at 20 weeks and it was then my heart broke all over again. This baby, another girl, had tumors in her heart. I was filled with the anxiety that she would not make it. I was afraid to plan for anything too far out, but I also felt that I had to enjoy the pregnancy. I worked throughout my pregnancy and they planned to induce at 39 weeks. I was excited to meet my baby at that point but still slightly scared of what was to come. They induced me on a Tuesday and I was sent home on Wednesday because the baby just wouldn’t come. On Thursday I went in for an ultrasound and 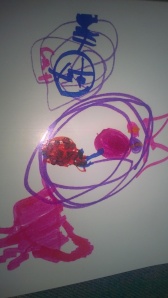 the baby hadn’t grown in two weeks so it was back to the hospital for induction again. Once again the baby was not coming and they wanted to check on her again. The baby was breech and I was sent for an emergency C-section. Fiona was born at 2:42 on January 18th. I was so happy but didn’t get a chance to hold her before she was swept away to the NICU. I went to the NICU after I was finally able to move my body. She was in the NICU for four days to wait for a duct in her heart to close and to see if her heart could function after it did. All went well and I was sent home after four days. Our lives were good, and aside from some appointments to check on her, our lives were pretty normal until she was seven months old. Early September in 2008 I started to notice her having infantile spasms and knew what to look for because we had her in to see a neurologist since birth. I wasn’t completely sure but I was guessing that was what it was, but I ignored it at first. I let it go until others saw it also. She was admitted to the hospital on September 11, 2008 and was kept for six days to monitor and get meds adjusted. By December 1, 2008 she was seizure free and stayed that way until October 1, 2010. That day was one of the most terrifying days of my life. She was sick and had gone down for a nap. She awoke and was just staring at the ceiling. I went to her and tried to move her head but it was locked into place. She was just staring ahead and could not move. This went on for 15 minutes and then she seemed tired but well. We rushed her to the hospital and on the way it started again. She was again unable to move, only this time she was vomiting all the while. She was still in a seizure when we arrived in the emergency room. They gave her a medicine that stopped it immediately and they ran all kinds of tests but there was no cause for the fever that she had earlier in the day that caused this seizure. Once again, after this episode, all was well. This calm period went on for about a year then she started having a new type of seizure. She would wake up and scream and rock and all sorts of other things. At first I thought it was a night terror until she

started to have them during the day. She would be up 10-20 times a night and have 3-7 during the day. I called the doctor and he wouldn’t see her or even talk to me; he just sent me a message to increase her meds and add new ones. She was suffering this entire time. I reached out but everyone said it was just night terrors or a febrile seizure. I felt alone and I was getting no sleep. I was afraid of what was happening to Fiona and her behavior was awful. Finally I decided to take her to her primary care doctor and he got the neurologist on the phone. We set up long term monitoring for Fiona and she went in two days after her birthday in 2012. We were in the hospital for four days that time. It took four days to have a seizure during the day that didn’t follow a nap. It was a long and hard process but her meds were once again adjusted and it worked. Since then she wakes up once in a while with a scream. She has started to have episodes at school where her eyes go back and forth quickly and she sees things. These have only happened at school so I have never seen it myself. Every once in a while I will catch her eyes with a look that says maybe she might be having a seizure but it never amounts to anything and more recently she has complained about feeling funny. I hope nothing comes of these things and she remains seizure free.

During this time I also had another baby girl. Bonnie is 3 and so far has no signs of TSC though she has yet to have any genetic tests done. When she is much older they may do an MRI to check to see if she has an signs in her brain but for now she is health and happy.