Today has just been a fail from the get go.

It shouldn’t have been. Today was the first day Connor slept until 8 in the last two weeks. I know my mommy friends aren’t going to ooze with sympathy when I’ve been blessed with a kid that has always slept great and let me sleep until 8 every day, but I can’t do this “anywhere between 5:30 and 7” thing. When I don’t get sleep, I forget what mugs are for. 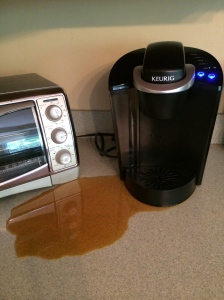 But back to today, I wake up when Chris leaves for work, but wondrously roll over to go back to sleep BECAUSE CONNOR ISN’T AWAKE! But instead of blissful sleep, I’m met with another hissing fit from Emma the cat because our new family member who joined us this past weekend, is once again, trying to be buddies with her. 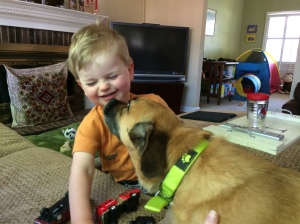 Connor loves Rosie, Rosie likes Connor despite the fact he thinks her bed was made for two, and Rosie even likes the cats. The cats DO NOT like Rosie.

So Emma won’t shut up and Rosie won’t leave her alone, so I finally get up and put Rosie in the crate. Back to bed…drifting…the sound of Emma puking on my bedside table. Awesome.

I’m in and out of sleep until the alarm, but thanks to the pet patrol, it wasn’t very restful.

Connor’s speech therapist came at 9. By the time I woke up I had developed a migraine and wasn’t in the mood to make breakfast, so I force fed Connor, since he’s never hungry on this diet anymore. Got some in his mouth and much on his face.

Then I was antsy through speech because I had been dragging earlier and still needed to get ready to go to Connor’s EEG. So I ran around like crazy between the time his therapist left and we had to go. I let Rosie run around the backyard in the meantime since I didn’t have time to walk her. But when she tried to come back inside, there were legs hanging out of her mouth.

My very first opportunity to hold a dying baby rabbit in my hands. Lovely.

Off to the EEG, which was one of the more challenging ones we’ve had since Connor is so mobile and not down with restricted movement. He was not thrilled with the process.

The EEG was just to check up on things. It was only an hour so there really wasn’t an expectation to catch a seizure, even though unfortunately we’ve been having more breakthrough seizures lately despite the early success of the diet. Connor started to refuse olive oil, and even though I’m now using mayo, butter and cream cheese for his fats (along with the staple whipping cream), we haven’t been able to get the same degree of control back, even though it is still better than pre-diet. We did actually attempt to get him to sleep during the EEG since waking up is his big trigger, but he wouldn’t even though he was almost out in the car on the way over. Naturally, he passed out as soon as we left. AND had a seizure upon waking.

We came home and I was running around swiffering, putting dinner together in the Crockpot and other chores. Once again, I let Rosie play in the yard. I had placed the dead bunny through the fence to my neighbor’s yard. Yeah, I know that makes me sound like a jerk, but their yard is a mess. I figured the body would be eaten by the snakes I assume live in their six feet of grass. Apparently I didn’t push it far enough because I got to do round two with prying it out of Rosie’s mouth. This time I had to do it with sticks because the rabbit was a lot worse for the wear.

At that point I realized I’d not eaten today, so I had three pieces of cheese.

Then I spent some time doing normal special needs mommy stuff like calling hospitals and making them bill Connor’s secondary insurance since you have to force hospitals and many medical practices to do EVERYTHING that you would think would just be part of normal operations.

But on the bright side, it is now after five. Hello, my good friend Jack D.

In all seriousness, I’m way behind on updating about Connor. Lots of good stuff coming soon.