I often question how it is that I’m handling things so well these days. I was a walking ball of anxiety for the first few months after Connor was born, and now I just feel so…normal — an adapted sort of normal — but normal nonetheless. At one point I even started questioning whether I was in denial, rather than just being adjusted. It probably helps that the second year of Connor’s life has been much smoother than the first. But I’ve seen a lot of online dialogue regarding birth and diagnosis stories. Some people have developed PTSD from the traumatic circumstances. Years later the thought of those circumstances still has a traumatizing effect on them. I don’t really think about it that much. Connor’s seizures started hours after birth, leading to a five-week stay in the NICU, so it was definitely traumatizing, but why is it that I’m able to just block all that out and not think about it, while others find themselves seeking therapy or suffering at the very thought. That’s actually what led to me wondering if I was in denial. I even Googled it (haha), but I think I’m too functional to qualify (of course, I found about eight other unrelated disorders I might have).

Chris recently spent some time going through some stuff in the office. When I went to bed that night, he had placed the buttons that Northside Hospital gives out to families when a baby is born on the table next to the bed. 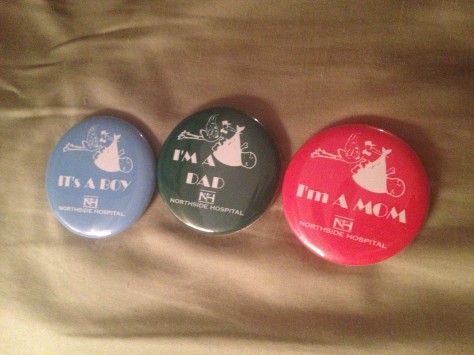 And suddenly, I was crying. I used to be a big cryer, but I hardly ever cry anymore. So I was surprised by my reaction to the buttons. They made me sad that we didn’t get to have a normal start and it brought back the feelings of fear. I remembered asking for something to help me sleep –which they wouldn’t give me — and lying awake bitter that I could hear other people’s babies on the maternity ward crying in their parents’ rooms. I remembered how cruel I thought it was that I had to stay on the maternity ward at all. I remembered how I didn’t quite know what to do with the buttons at the time. I don’t even remember if I wore one. But I knew how excited I would have been about them had everything gone normally. I love cheesy stuff like that.

Acceptance or denial? I guess I’m somewhere in between.

2 thoughts on “Acceptance or Denial?”