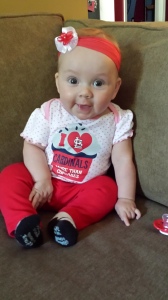 Day 9 of of Blogging For TSC Awareness

For 15 years, my normal consisted of all things BOY.  In 2014, remarried with now a fourth son, and pregnant with a girl, I knew that my normal was going to change significantly. Everleigh Sophia was born on December 5, 2014, after 41 weeks of an uncomplicated pregnancy and about 10 hours of beautiful labor.

This pregnancy, so unexpected, and belated, worried me, but by the time my gorgeous girl appeared, my worry took a backseat to my joy. I was so grateful to have this experience again. Evie arrived into a room full of eager family.  7lb, 5oz with all 10 fingers and all 10 toes.  Perfection!

Everleigh was wonderful and distinct.  Nothing about my experience with her felt normal from day one. My mommy instinct kept telling me that something was “off” but I couldn’t put my finger on it. I’d express my concern to anyone that would listen but kept hearing that I was used to boys and this girl was bound to be different.  She seemed so restless and irritable, so nursing was a challenge to say the least.  She made strange, unfamiliar noises that we jokingly referred to as her “growl”.  She also looked dramatically to the side (first right and then left) & fluttered her eyes often.  We again joked…”she’s a diva”, “already stubborn, refusing to look us in the eye”.  Was this all normal baby stuff? Had it been so long that I’d forgotten?

Evie was nine weeks old and I was unable to shake my unease.  My

gut wasn’t just telling me there was a problem, it was screaming at me. No doubt, I was trying everything.  I was a slave to google. I made numerous calls to lactation consultants. I took her for extra visits to her pediatrician. I visited another “holistic” pediatrician some miles away (who performed a frenectomy of her upper lip and tongue in an attempt to improve what might be the cause of her breastfeeding problems). We had multiple pediatric chiropractic appointments (to treat what was believed to be torticollis). Each time, I would be reassured that these were “normal” baby issues and each time I would go home to the continued feeling that we were missing something.  I sat staring at my sweet girl, crying, and that’s when I began putting all of the behaviors together.  I suspected seizures. It took a couple of days to completely convince myself and my husband (who was now getting used to coming home to hear my “freak out” about Evie’s behaviors of the day).

We nervously went to our pediatrician on February 11th, and after she actually witnessed the “behaviors”, we were promptly sent to St. Louis Children’s Hospital.  The ER doctors agreed that it was seizure like activity.  Could she possibly have an infection? I was almost excited. That must be it!  She lives with 4 hygiene deficient boys.  Simple explanation!  An acute infection that has caused some seizures.  We can treat it and move on. The ER staff drew blood, performed a spinal tap, started antibiotics and asked us a thousand questions. They gave her Ativan and almost immediately, the seizures stopped. A CT was suggested just as a precaution. We accompanied her and then waited for answers.

Only moments later, a nice young doctor entered the ER room to tell us that he had preliminary results.  This is when my normal exploded into a thousand pieces. I heard what must be two of the most feared words a parent could hear, brain and tumors.  It all happened so fast. I felt sick, dizzy, confused.  We were told that the tumors were benign and most likely due to a genetic disease. Something like tumerous?  tubulous? scler something??  Evie would be admitted for more testing to confirm. I wasn’t even quite sure what he had said.  He exited the room and I sat dumbfounded.

The next two days were a whirlwind.  Evie had more tests than I’ve had in my 43 years of life. An echocardiogram, EKG, EEG, Brain MRI, Abdominal MRI, and general X-rays. The diagnosis was confirmed.  It was a rare genetic disorder; tuberous sclerosis. We were told that our daughter had “multiple brain tumors…too numerous to count”.  The tests revealed five tumors within her heart, multiple, small tumors in both kidneys, along with the tumors in her brain. We were given some informational pamphlets and told that there are varying degrees of the disease and there is no way of knowing how Evie will be affected. Our job was to go home and give her a daily anti-seizure medication and monitor her. Seriously? Monitor what? I wanted to ask what to expect, but they had already said there is no way of knowing. I glanced at the information but honestly didn’t want to know the possibilities.  What’s the point?  I didn’t want to spend any time worrying about what might be.

We went home and it was like a miracle.  Our irritable, uncomfortable baby was now much calmer.  The seizures were gone and nursing was improving.  She still had her quirks, some rigidness, and a left gaze, but I could deal with that.  It wasn’t so bad.  I decided that everything was going to be fine, if anything, better than before her diagnosis. I went into a state of blissful denial.

And then it began again.  Two weeks later, the seizures returned.  It felt like a slap in the face. This was followed by more doctor visits, an ER visit, med adjustments, and finally another hospitalization before the seizures finally stopped. My bliss disappeared. Maybe it was time to educate myself.

I obviously hope for a mild case for Evie.  She’s had more seizures, but I am now educated and somewhat prepared.  I will not allow TSC to take another cheap shot at me. I’m smarter and stronger. I’m tapping into all of the resources available and going to bed each night knowing that I’m doing everything that I can. I’m definitely “on the lookout” which no doubt makes me seem a bit more nervous than usual.  But, I’m also much more aware of the beautiful moments in each day. My eyes are opened wider. My love feels deeper. I’d like to think that I’m becoming a better mom to all of my children.

I never would have thought that my normal would include a seizure diary, daily medications, weekly therapy appointments and discussions of MRI results.  Of course, I never expected to see my boys nuzzling with their baby sister or hear them talk sweetly to her while she admiringly coos. I feel blessed to experience this new normal. 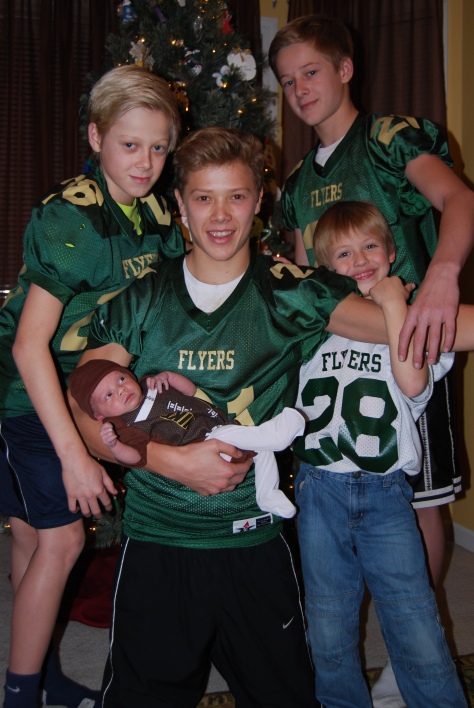 2 thoughts on “My New Normal”